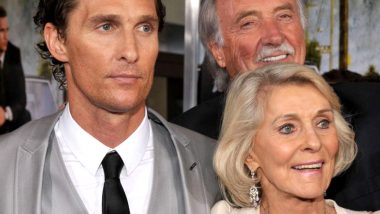 Hollywood star Matthew McConaughey says his father died of a heart attack while having sex with his mother. The Oscar-winner is all set for the release of his new memoir, "Greenlights", in which he has opened up about his family history. In an excerpt featured in his People cover story, he revealed that his father, James Donald, died while having sex with his mother Kay, pagesix.com. Fast Times At Ridgemont High: Ex-Couple Brad Pitt and Jennifer Aniston Reunite For Live Table Read With Julia Roberts, Matthew McConaughey

"I got a call from my Mom. ‘Your dad died.' My knees buckled. I couldn't believe it. He was my dad. Nobody or nothing could kill him. Except mom. He'd always told me and my brothers, ‘Boys, when I go, I'm gonna be makin' love to your mother'. And that's what happened. He had a heart attack when he climaxed," McConaughey said. Matthew McConaughey Asks ‘How Can I Do Better As a White Man?’ In a Conversation on Race and White Privilege With Emmanuel Acho (Watch Video)

James died in 1992. He and Kay had an on-again, off-again relationship, marrying each other three separate times. Matthew was conceived shortly after their third wedding. "They were, at times, violent," he told People, adding: "As I say in the book, that is how they communicated. They were divorced twice, married three times, I mean, yeah, it was like the Pacific Ocean in a storm."

(The above story first appeared on LatestLY on Oct 18, 2020 01:50 PM IST. For more news and updates on politics, world, sports, entertainment and lifestyle, log on to our website latestly.com).