Michael Keaton Returns As Batman, Fans Are Speculating About Batman Beyond

Michael Keaton's return as Batman to DCEU is making fans quite skeptical and speculative too. While some aren't comfortable to see Ben Affleck replaced by Keaton, others are talking about Batman Beyond. 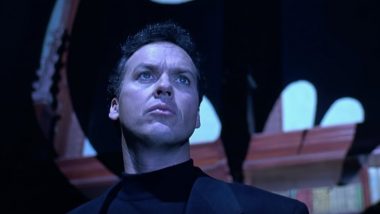 Michael Keaton's return as Batman in the DCEU has made fans highly speculative. They initially took the news with great shock and later settled into a calmer attitude when they tried to string together the reasons behind this move. That's the best thing about the fans of all superhero universes. They have read the comic books and are aware of a lot of twists and turns which help them to decipher the moves made by production houses. In this case too, many on Twitter are of the opinion that the decision to have a 69-year old Batman might have something to do with Batman Beyond. 10 Best Memes on Michael Keaton's Turn as Batman to Remind Us That It's the Best (See Pics)

Batman Beyond is basically the future of the caped crusader. It talks about a teenage Bruce Wayne getting his training from an elderly Batman. Fans are of the opinion that if that's taken into consideration, Keaton's return makes complete sense. Keaton played the titular role in Tim Burton's Batman and Batman Returns.

Here're some of the reactions.

If wishes were, well, real!

Need to see that live action Batman Beyond suit 🙌🏼🙌🏼

And the speculations begin

Could Keaton replacing him be a way of them setting up Batman beyond ?

I’d be on board for that, the animated series was amazing

DC finally jumps ahead of Marvel. Why execute the endless cycles of reboots sequentially when you can execute them in parallel? https://t.co/rkKvJSFue5

This time, wishes are horses!

I would love to see Clooney playing old Batman than Keaton. 😶

I'm pretty sure it's to spin it into the multiverse, we'll see how it plays out I love the ol' Keaton Batman movies as much as the next guy, but I'm skeptical.

Hope is a strange thing...follows everywhere

Turns out Keaton is just coming back for the Flash movie, and will probably be playing Batman from the future or a parallel world. I’m still hoping it’s going to be Batman Beyond.

Maybe they’re going the Batman Beyond route. If so that makes sense.

As per Screenrant, Keaton's character would be more of a mentor, something that we are used to seeing with Nick Fury in Marvel movies.

(The above story first appeared on LatestLY on Jan 05, 2021 02:23 PM IST. For more news and updates on politics, world, sports, entertainment and lifestyle, log on to our website latestly.com).