Oscars 2019: From Lady Gaga to Bradley Cooper, Here Are the Most-Searched Oscar-Nominated Actors 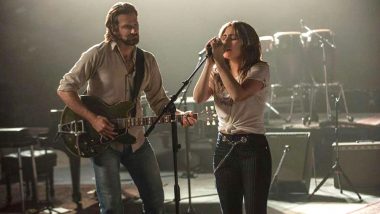 Lady Gaga and Bradley Cooper from A Star Is Born

The 91st Academy Awards ceremony will be taking place on February 24, 2019 (February 25 in India) at the Dolby Theatre. It is one of the most-watched award shows but this time the viewers would see a difference. This time there will be no host for Oscars, confirmed the Academy. But the curiosity to know who could bag the little golden man is sky-high. The search giant shows how cinephiles are going gaga over the Oscar-nominated actors and actresses. From Lady Gaga to Bradley Cooper, let’s take a look at the most-searched Oscar-nominated actors of this year. Oscars 2019 Complete Performers List: Lady Gaga and Bradley Cooper To Sing ‘Shallow’; Will Kendrick Lamar Perform ‘All the Stars’ from Black Panther?

As per the search giant Hollywood sensations Bradley Cooper, Lady Gaga, Melissa McCarthy, Rami Malek and Christian Bale are the most-searched Oscar-nominated actors. These are the actors and actresses are nominated in the Leading Role category. This year’s nominations for the 91st Academy Awards undoubtedly left many of them surprised.

Here's what the trends say:

Bradley Charles Cooper made his directorial debut with the film A Star Is Born. It is a remake of the 1937 film that has the same name. This is the fourth time the 1937 film has been remade featuring Bradley as Jackson “Jack” Maine. His character in the movie is of an established singer and a songwriter who is also secretly battling from alcoholic and drug addiction. Bradley Cooper Nominated for Oscars 2019 Best Actor Category for A Star Is Born: All About Cooper and His Chances of Winning at 91st Academy Awards

Watch the trailer for A Star is Born:

Lady Gaga who essayed the role of Ally Maine, a nightclub singer-songwriter, won hearts of viewers and critics in A Star Is Born. Most of the songs of the film has been co-written and produced jointly by Gaga and Bradley Cooper. It is the track “Shallow” which grabbed attention in various countries and also reached the number one position. Lady Gaga Nominated for Oscars 2019 Best Actress Category for A Star is Born: All About the Singer and Her Chances to Win at 91st Academy Awards

Rami Said Malek played the role of Freddie Mercury, a lead vocalist of the rock band Queen in Bohemian Rhapsody. He has won various accolades and also received a nomination for the 91st Academy Awards for Best Actor. Rami Malek’s impeccable performance in this biopic left a mark in audiences’ minds. Rami Malek Nominated for Oscars 2019 Best Actor Category for Bohemian Rhapsody: All about Malek and His Chances of Winning at 91st Academy Awards

Watch the trailer of Bohemian Rhapsody:

Melissa Ann McCarthy essays the role of Lee Israel, struggling from writer’s block, in the biographical movie Can You Ever Forgive Me? Directed by Marielle Heller, McCarthy has put forth a mix of funny and emotional performance in the film. The first time when Melissa earned her Oscar nomination was for Bridesmaids which released in 2011. And now essaying the role of a fearless writer in Can You Ever Forgive Me? earned the 48-year-old actress her second Oscar nomination. Oscars 2019 Full Nominations List in PDF: Best Actor, Best Actress, Best Picture & More Category-Wise Nominees at 91st Academy Awards

Watch the trailer of Can You Ever Forgive Me:

When the cast of Vice was announced, confirming Christian Bale would be portraying the role of Dick Cheney, former U.S. Vice President, that itself won an immense amount of appreciation from fans and industry members. Directed by Adam McKay, this biographical comedy-drama turned Bale totally unrecognizable, that fantastic was his transformation. With a staggering plot and performance, Vice has received eight nominations at the 2019 Oscars. Christian Bale Nominated for Oscars 2019 Best Actor Category for Vice: All about Bale and His Chances of Winning at 91st Academy Awards

Watch the trailer of Vice:

The five celebrities Lady Gaga, Bradley Cooper, Christian Bale, Rami Malek and Melissa McCarthy are not just in contention for the prestigious trophy, but also are the most-searched actors and actresses currently. The performances of these stars not just received universal praise but their notable performances also made way to the 91st Academy Awards. Who do you think will win the award for the Best Actor and Best Actress in the Leading Role? Share your predictions with us in the comment box below.

(The above story first appeared on LatestLY on Feb 18, 2019 09:10 AM IST. For more news and updates on politics, world, sports, entertainment and lifestyle, log on to our website latestly.com).