Fleabag actor-creator Phoebe Waller-Bridge will star alongside Harrison Ford for the fifth installment of the iconic franchise. Read on. 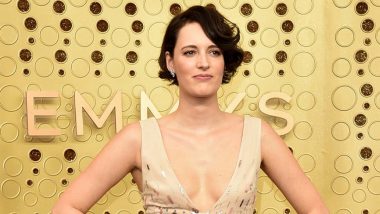 Fleabag actor-creator Phoebe Waller-Bridge will star alongside Harrison Ford in the fifth instalment of the iconic franchise, Indiana Jones. Ford is returning to the role of the legendary hero archaeologist for the fifth time. John Williams will return to score the film, continuing a musical journey which began 40 years ago with Raiders of the Lost Ark, Disney said in an announcement on Friday. Phoebe Waller-Bridge Reveals Jennifer Lopez Inspired Fleabag's Hot Priest.

"I'm thrilled to be starting a new adventure, collaborating with a dream team of all-time great filmmakers," said director James Mangold. "Steven, Harrison, Kathy, Frank, and John are all artistic heroes of mine. When you add Phoebe, a dazzling actor, brilliant creative voice and the chemistry she will undoubtedly bring to our set, I can't help but feel as lucky as Indiana Jones himself.” Emmys 2019: Fleabag Wins Top Honours, Here's What Phoebe Waller-Bridge's Show is All About and Where You Can Watch It.

A new #IndianaJones adventure begins July 29, 2022. Phoebe Waller-Bridge joins the cast alongside Harrison Ford in the fifth installment of the iconic franchise. The inimitable John Williams will also return to score the film. pic.twitter.com/OrYJHNY6Ys

Waller-Bridge has emerged as one of the most talented stars in Hollywood recently with the viral success of her drama Fleabag. She was also a part of Solo: A Star Wars Story and has worked as one of the writers on the upcoming James Bond movie No Time to Die. Kathleen Kennedy, Steven Spielberg, Frank Marshall and Simon Emanuel will serve as producers. The film is set for release on July 29, 2022.