Scarface Reboot: Luca Guadagnino Roped in As Director; Twitterati Discuss Who Could Recreate Al Pacino's Tony Montana in the Remake

. While there have been several versions of Scarface, the most celebrated one remains to be the Al Pacino starrer. The 1983 film was helmed by Brian De Palma. 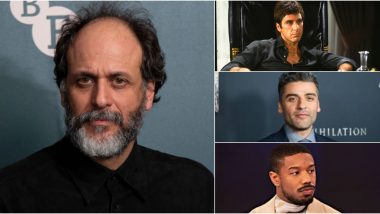 Director Luca Guadagnino is all set to add a crime drama to his filmography with the Scarface reboot. Yes! A reboot of the popular film is in the works and the Call Me By Your Name director is all set to helm it with Coen Brothers' script. Reports suggest that Guadagnino’s version will be reimagining the original immigrant narrative established in both those films, and this time will be set in Los Angeles. Joel Coen and Ethan Coen have been working on a draft for the new film. While there have been several versions of Scarface, the most celebrated one remains to be the Al Pacino starrer. The 1983 film was helmed by Brian De Palma. 10 Underrated Movies of  Al Pacino That You Should Definitely Catch Up!

The filmmaker also has Call Me By Your Name sequel in his pipeline which is based on Andre Aciman's novel, Find Me. Scarface reboot is to be produced by Dylan Clark via Dylan Clark Productions, with Scott Stuber serving as executive producer alongside Marco Marabit. Considering the film is currently in its scripting stage, there's no knowledge about the casting yet though it will certainly be interesting to see who bags Pacino's role.

Fans of Scarface weren't very thrilled when the remake news first hit the stands but hearing about Guadagnino coming on board, Twitterati seem to be more positive about the project now and are now discussing on who could play the title role. Check out some reactions here.

Oscar Isaac NEEDS to be cast as Tony Montana in the #Scarface remake. pic.twitter.com/aHX3HD2Znp

I still don't think we need a new Scarface.

But Michael B Jordan is a great actor #Scarface pic.twitter.com/TkMELvzIwL

Should We Expect a Quirky Remake Then?

Luca Guadagnino and Coen Bros are on board for the #Scarface remake. This better be a quirky masterpiece with cocaine and peaches aplenty.

What are your thoughts? What do you want most from this remake? pic.twitter.com/tbpOr7ECJY

Coen Brothers + Luca Could End Up a Good Reboot!

I was 100% against a (2nd) remake of #Scarface until this moment, when I realized it'll be a Coen Brothers script.

I stand corrected. As you were, gents. https://t.co/Q4HlMhpejI

Well, there have been reports about Michael B Jordan's casting for the lead role though nothing has been confirmed yet. Who would you like to see in the Scarface reboot? Tell us in comments below.

(The above story first appeared on LatestLY on May 15, 2020 10:06 AM IST. For more news and updates on politics, world, sports, entertainment and lifestyle, log on to our website latestly.com).