Sebastian Coe, a former Olympic medalist explained how many people still to this day believe that Queen Elizabeth did jump from the helicopter in the James Bond skit. Danny Boyle, who is the maker of Slumdog Millionaire, was the one who suggested the idea of James and the Queen jumping out of the helicopter together, and persuaded her to do it. 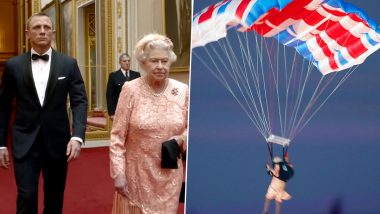 Former Olympic medalist Sebastian Coe, who was responsible for organising the 2012 Olympics in London, including the Queen's unforgettable sketch with Daniel Craig, which opened the ceremony, said in an interview with BBC News that "a whole heap of people still believe she did jump from the helicopter," reports Variety. Video: Committal Service For Queen Elizabeth II Begins At St George’s Chapel in Windsor Castle.

"It was an extraordinary moment because it was the only day throughout the seven-year period of [organising] the Games when I did genuinely feel the glow wobbling," Coe recalled in his interview with Huw Edwards on Monday morning.

"[The maker of Slumdog Millionaire] Danny Boyle, who was our director, came in and said, 'We've done some market research and it shows the Queen and James Bond in that order are the iconic global figures [for Britain].' And I was buying it right up to that moment until he said, 'Wouldn't it be a great idea if we could get them to jump out of a helicopter together?'"

"And in fairness of course it was Danny that actually got it across the line, the great republican [anti-monarchist], who actually turned down a knighthood for his efforts in delivering the opening ceremony, sat with Her Majesty, and there are lots of things that are said about it, but actually it was Danny who persuaded her," added Lord Coe, who became the stuff of legends in his country when he won two Olympic golds (for 1500m) and two silvers (for 800m) at both the Moscow and Los Angeles Olympics in 1980 and 1984, respectively.

"My first role was actually to take [Anne] the Princess Royal through the creative," continued Lord Coe, who is, incidentally, the grandson from his mother's side of the late former owner of New Delhi's Marina Hotel, Sardari Lal.

"I remember [showing her] these rather hammed-up drawings and showing her the helicopter and the only question I got at the end of it was, What kind of helicopter?' And I realised of course [Anne] knew everything about helicopters," Lord Coe reminisced, according to Variety. Queen Elizabeth II Funeral: Last Rites Ceremony of Her Majesty Begins at Historic Westminster Abbey.

Anne's husband, Vice Admiral Timothy Laurence, is a retired Royal Navy officer, which explains the Princess Royal's knowledge of such matters. "She said, 'Well of course you wouldn't get a Chinook under Tower Bridge. You might get a Sea King and it would need to be a twin engine.' Of all the questions I thought I'd get. But that's how it started."

(The above story first appeared on LatestLY on Sep 19, 2022 10:40 PM IST. For more news and updates on politics, world, sports, entertainment and lifestyle, log on to our website latestly.com).