The Big Bang Theory cast had their last script reading session on Wednesday. Since then, the cast has been super shaken up as it would be the end of an era! 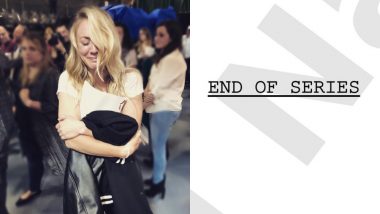 The Big Bang Theory to come to an end (Photo Credits: Instagram)

The Big Bang Theory cast had their last script reading session on Wednesday. Since then, the cast has been super shaken up as it would be the end of an era! Taking to Instagram, all the stars shared their thoughts on the legacy created by Chuck Lorre along with the cast of The Big Bang Theory.

Captioning one of the pictures with End of Series, Kaley Cuoco wrote, "Yea, didn't sleep." In another post where, she is seen crying, Cuoco wrote, "Prepare yourselves...for a finale that has truly given me a loss for words," and added, "Our whole universe..." Earlier during an interview with E! News, Kaley Cuoco had stated how her crying made the shooting of the final season a little tough.

"We're actually going to pre-shoot the whole thing, so we'll have shot it, and then we will have an audience taping. That was probably because they knew I'd be crying the entire time. So we still want the audience experience...so we're gonna still do the audience, but we will have taped it and shot it beforehand, so if the tears come unexpectedly, then that's just what's going to happen, because I guarantee you it's going to happen."

Kunal Nayyar and Melissa Rauch also shared pictures quoting the end of series. To one of Nayyar's posts, actor Johnny Galecki wrote, "Roughest page ever read." The series finale is set to air on May 16 on CBS. Perhaps we'll have to wait a little more for the content to reach India. Unless someone strikes a good deal that allows us to watch it with the whole world.

(The above story first appeared on LatestLY on Apr 25, 2019 01:00 PM IST. For more news and updates on politics, world, sports, entertainment and lifestyle, log on to our website latestly.com).