The Suicide Squad: Before James Gunn Brought His Crazy Vision, Here’s What Once-Planned Suicide Squad 2 Was Supposed to Be About!

The Suicide Squad had its worldwide release last Friday and so far it has impressed critics and audiences. Not really a sequel to ‘2016s Suicide Squad but taking place in the same continuity, The Suicide Squad follows a newly formed Task Force X with some returning characters and sees them going to Corto Maltese to take down something known as Project Starfish. 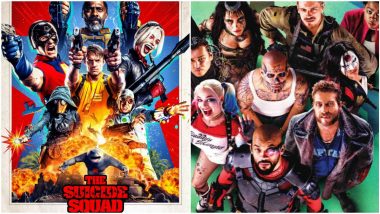 The Suicide Squad had its worldwide release last Friday and so far it has impressed critics and audiences. Not really a sequel to 2016's Suicide Squad but taking place in the same continuity, The Suicide Squad follows a newly formed Task Force X with some returning characters and sees them going to Corto Maltese to take down something known as Project Starfish. Ever since James Gunn joined the director’s chair, the project had a smooth production with hardly any hiccups. But before James Gunn took over the directorial duties of the film, the project was stuck in a bit of limbo. The Suicide Squad Ending Explained: What Do The Two Post-Credit Scenes From James Gunn’s DC Film Mean? (SPOILER ALERT).

With the critical panning of David Ayer’s Suicide Squad, the movie was still able to turn around a profit and a sequel was announced with a production start of early 2017. Ayer and Will Smith were expected to return with the director campaigning for a R rating. But soon after Ayer left the project and set his eyes on Gotham City Sirens which he was planning to direct with Margot Robbie returning as Harley Quinn. The Suicide Squad Movie Review: James Gunn’s DC Epic Is a Violent Delight (LatestLY Exclusive).

Warner Brothers soon started searching for a new director and courted Mel Gibson to sign on. Unfortunately that didn’t work out so then the studio set their eyes on Ruben Fleischer, Daniel Espinosa, Jonathan Levine and David S Goyer. Warner Brothers would then eventually land on Gavin O’Connor to direct and write the sequel who was fresh off from making The Accountant.

Will Smith, Margot Robbie, Joel Kinnaman, Jai Courtney, Karen Fukuhara and Viola Davis were expected to return along with Jared Leto’s Joker and it was even reported that Deathstroke would have appeared in some capacity. O’Connor was even adamant about having Ben Affleck’s Batman be involved but was declined by the studio. Suicide Squad 2 would have featured a lineup of Deadshot, Harley Quinn, Rick Flag, Katana, Captain Boomerang, Black Spider, Nightshade, Shrike and Blockbuster. It would feature the squad on a mission to the Middle East where they would need to retrieve a metahuman child who was held captive by a terrorist group known as Onslaught. The story was even said to delve deep into the backstory of Will Smith’s Deadshot and would explain how he went on to become the supervillain. The film was also supposed to have a hard R rating.

Later the same script would again go through multiple rewrites with some having Black Adam as the main antagonist in them. Gavin O’Connor then would eventually leave the project over frustration that Warner Brothers wasn’t letting him achieve his full vision. According to Variety’s Justin Kroll, he explained in a tweet that O’Connor left the project due to the story being way too similar to Birds of Prey which was already done with production at the time.

On the Gavin O'Connor front in relation to SS2, hearing the story he had for the sequel ended up almost being identical to the BIRDS OF PREY story and when that film was given the go ahead to go before SQUAD 2, O'Connor grew frustrated and fell off project to do HAS BEEN instead

With no directors set in place, Warner Brothers was out on the hunt again for a new director, enter James Gunn. Gunn, who had recently been fired from Disney over a bunch of distasteful tweets early from his career, had been picked up by the studio. He would then be given complete freedom to do whatever he wants with the franchise and would bring a bunch of returning characters along with some new faces. After that everything, later on, is history as Gunn would go on to create one of the best comic book movies ever while being hired again by Disney to cap off his Guardians of the Galaxy trilogy. The Suicide Squad starring Idris Elba, Margot Robbie, Joel Kinnaman, John Cena, Sylvester Stallone, Daniela Melchior, David Dastmalchian and Viola Davis is out in theatres.

(The above story first appeared on LatestLY on Aug 10, 2021 04:25 PM IST. For more news and updates on politics, world, sports, entertainment and lifestyle, log on to our website latestly.com).