Year Ender 2021: From The Batman to No Time to Die, 7 Best Trailers That Blew Our Mind!

From Dune, to Spider-Man: No Way Home, to The Batman, the year provided with some of the best trailers that graced our screens. All these trailer gave us a great exciting tease and just riles us up even more for the films. 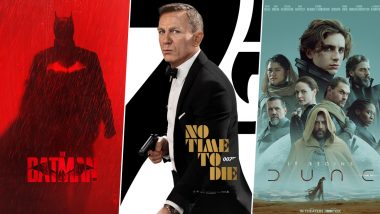 Trailers are something the fans clamour for when anticipating a film. Waiting for the first look at the new films coming out gets people excited for them. It is an age-old tradition that has been driving the popularity of movies. So what makes a trailer good? Well a trailer is good when it doesn’t give away much of the plot and provides an exciting new look at the movie. A trailer can be subsequently bad when it gives away way too much and there is no element of surprise left anymore. Year Ender 2021: From Tom & Jerry to The Matrix Resurrections, 11 Most Disappointing Hollywood Films of the Year and the One Redeeming Factor About Them! (LatestLY Exclusive).

2021 was filled with a bunch of great trailers. From Dune, to Spider-Man: No Way Home, to The Batman, the year provided with some of the best trailers that graced our screens.  All these trailer gave us a great exciting tease and just riles us up even more for the films. So with 2021 coming to an end, let’s take a look at seven of the best trailers from this year. Year Ender 2021: Scarlett Johansson, Gal Gadot and Other Hollywood Celebs Who Became Proud Parents This Year.

The first trailer for The Matrix Resurrections was the best tease you could have asked for this film. Ignoring the reception the movie is getting right now, the trailer didn’t tell us much and provided a lot of great and cool looking shots that were set to the tune of White Rabbit by Jefferson Plane that again fit the tone of The Matrix. Even though the movie failed to live up to the hype, we still got an amazing trailer out of it.

Dune had a great initial trailer set to the cover of Eclipse by Pink Floyd, but the second trailer just blew it out of the water. The second trailer would showcase more of what to expect from the scope of the film and just how huge it is going to be. It was magnificent to say the least and it just filled every sci-fi fan with happiness and made us extremely hyped for the movie.

Spider-Man: No Way Home is the biggest film of 2021 without a doubt. Just amassing a billions dollars worldwide over the course of 12 days, the movie has already proved to be a success. But before release everyone knows the amount of leaks this movie had gone through. Having its first trailer leaked in an extremely bad quality a day before on TikTok, Spider-Man: No Way Home still managed to get everyone excited. Not to mention it had one of the best trailer reveals of the year when they showcased Alfred Molina’s Doc Ock.

Well are you guys excited about Vikings? Then you’re in luck as Robert Eggers’ The Northman comes out next year. A revenge story that sees a Viking prince set out to kill the person who wronged his family, the first trailer offered a great glimpse at what seems to be another great entry by Eggers. Having a great standout cast that features many great actors, this is a 2022 film to be on the lookout for.

No Time to Die Final Trailer (US Version)

No Time to Die had a tough journey to its release. Suffering delays, rewrites, director changes and with COVID, the movie just went through a lot. By the time it was coming out we had already gotten four trailers. While I still prefer the second trailer for the film, the final trailer does a great job at making the audience excited for the movie all over again.

The Green Knight was one of those movies this year that just spoke to me. Initially I wasn’t excited for this movie at all but everything changed after the second trailer dropped. Promising a magical and wonderful journey about honour and bravery, The Green Knight just had one of the best trailers of the year.

The Batman is perhaps next year’s most awaited film. Starring Robert Pattinson as Batman/Bruce Wayne, the first trailer for the film arrived last year at DC Fandome which was met with critical acclaim. The recent trailer that premiered during the second DC Fandome got even higher praise as it boasted great visuals and showcased amazing action. The trailers are definitely a highlight and here is hoping the movie lives up to the same quality.

(The above story first appeared on LatestLY on Dec 27, 2021 09:41 PM IST. For more news and updates on politics, world, sports, entertainment and lifestyle, log on to our website latestly.com).