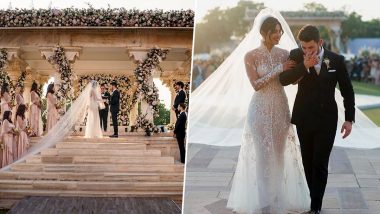 And on the eve of Nick and Priyanka's second anniversary, hubby dearest took to social media to heap praises on his wife and called her 'Inspiring and Beautiful'. Priyanka Chopra-Nick Jonas Wedding Anniversary: 5 Major Events In Their Married Life Over Two Years.

Nick shared pictures from his white wedding with Chopra and penned, "Two years married to the most wonderful, inspiring and beautiful woman. Happy anniversary @priyankachopra I love you. ❤️" Now that's heart-melting! Nick and Priyanka tied the knot in a white wedding and later in a traditional Hindu ceremony. Their wedding, one of the most lavish do's in Bollywood, was an affair worth remembering. Happy Anniversary NickYanka!

(The above story first appeared on LatestLY on Dec 01, 2020 05:04 PM IST. For more news and updates on politics, world, sports, entertainment and lifestyle, log on to our website latestly.com).