It was a dream come true for me to have Big B sing my composition maintains the Maestro. Amitabh Bachchan has sung devotional songs in the past as well, but this Hanuman theme has an up-tempo tune that needed to be sung with gusto and that’s exactly what Big B did! 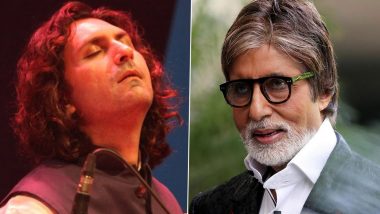 Santoor Maestro Rahul Sharma, son of Pandit Shivkumar Sharma, has curated an exceptional musical treat for the MX Player web series titled Ramyug. Directed by popular filmmaker Kunal Kohli, the said series features a beautiful number titled Hanuman, sung by Bollywood's legend Amitabh Bachchan. We caught up exclusively with the exceptionally talented  Rahul Sharma to know about this special endeavor.  We were as much interested in knowing the life story, as indeed the person behind the personality. Here's a freewheeling chat!

You have studied Economy, academically speaking, but music is something you are trained in. So it is only fair to assume that zeroing in on music for a career came as an organic choice.

I was born and raised in Mumbai, went to Bombay Scottish School. That was a very demanding school and even my mother was very particular about my academic progress. I would play harmonium after my school and my mother knew this special interest I had in music. I started playing the Santoor (the small one), it actually fell into my lap when I was studying in college. So my musical journey actually began from my school as well, as it progressed into my college days. To be true, I never kind of displayed my artistic skills in school. I was more of a backbencher and the spotlight had to fall upon me only much later.

Were you a star at the college campus thanks to your competence in the musical arena?

No, not at all. Very few people knew that I was so inclined to music back in the day. I studied at Mumbai's Mithibai College, and back in the day, they were lenient (generous) so as to allow me to travel with my father all over the world for his International concerts. I had started composing my own tunes and had started doing fusions etc. but I loved the travel part that came with the international as I got to visit 25-30 countries, from New Zealand to South Africa to Australia, and my aim was to focus more on learning the instruments from Santoor to Tanpura and learn at least 50 percent of what my father had learned. So even if my father was composing music for films and collaborating with legendary personalities such as Pt. Hariprasad Chaurasia, I decided to keep my attention fixed on learning music as it is a vast ocean,  and you only keep on learning more, and the process is endless, as you evolve.

Collaborating with Peter Gabriel at the age of 22 must have really given you the validation you truly needed, right?

A little before that we made an album but nobody, which was ready to pick it up as most companies would not realize what I was trying to do with these compositions. Finally, Sony picked it up, and then a lot of collaboration happened to post that. I remember, I started playing internationally in the year 1995-96 and post 1999 there were many collaborations that happened only to validate me as an artist.

How did you work on the blend of Santoor and the rock genre? Did the amalgamation happen naturally?

I used to listen to a lot of Pink Floyd. But I had to have the much-needed mastery over the instrument. That only happened with my album title Rebel where I had to fine-tune the blend, as I wanted to have my compositions to have a recall value. I wanted to have it a proper mukhda and Antara rather than just mix it up with a raag and electronic guitar. I wanted people to be able to hum the composition and not just appreciate it for its fine blend. That's the reason I had to compose it my way in my own capacity.

Collaborating with Amitabh Bachchan for the Hanuman song now. How did this happen?

for every kid who grew up in the 80s and even now, Amitabh Bachchan is the ultimate hero. So when we collaborated for a song on Lord Hanuman Ji, I reached out to him as the director Kunal Kohli thought he (Big B) was the perfect choice. Mr Bachchan asked for a scale that would suit his range.  That gave us an indication that he was interested in doing the song. So we recorded the song and with all humility, he said If you like it keep it or forget about it.

He kept asking if the composers were sure about his inclusion as the album featured musical greats such as Ustaad Zakir Hussain, Ustaad Rashid Khan, Pt Hariprasad Chaurasia, and Pt Shivkumar Sharma. It was so humble of Mr Bachchan to give his time and his voice for that album. He is a thorough professional. And only a crazy person would think about the prospect of not using his voice after having done the recording with him. His understanding of melodies, rhythm, and knowledge of sounds is something one can learn a lot from. He is so amazing and incredibly humble!. It was a dream come true for me to have him sing my composition the Hanuman song has already crossed 5 million views and going strong. I’ve always been his huge fan, and now I’m truly humbled by his blessings for my composition.

(The above story first appeared on LatestLY on Jun 07, 2021 06:03 PM IST. For more news and updates on politics, world, sports, entertainment and lifestyle, log on to our website latestly.com).