Allu Arjun Has Watched this Aamir Khan Movie More Than 20 Times - Guess Which?

In his recent interaction, Allu Arjun named his favourite Bollywood releases while also naming that one Aamir Khan movie which he has watched over 20 times. 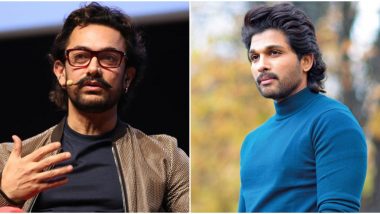 Whoever said actors don't pat each other's backs should check out Allu Arjun's enthusiastic reaction when asked to name his favourite Bollywood movies. The Telugu actor who recently delivered a smash hit in Ala Vaikunthpurramuloo was asked if he's a fan of Hindi movies and if yes, which are his favourite releases. Surprisingly, the actor offered an interesting palette that served releases from the 90s to recent ones. Without restricting himself to any one actor, in particular, Allu Arjun named three of his favourite releases of different actors and they all are winners in some way. Allu Arjun’s Music Album ‘Ala Vaikunthapurramuloo’ Gets 1 Billion Music Streams on YouTube.

The actor in his recent interaction with Bollywood Hungama was asked to name his favourite Bollywood releases and he said, "I love Jo Jeeta Wohi Sikandar. It is one of my favourite films. I think I have watched it more than 20 times. DDLJ (Dilwale Dulhaniya Le Jayenge). I think I have watched it multiple times and it still has that magic whenever I watch it. Personally, I think I have watched Gully Boy 3-4 times because I personally like a lot of rap and it is a very original Indian rap.” Interesting choices, eh? Typical but fascinating. Australian Cricketer David Warner’s Dance Moves On Ala Vaikunthapurramuloo Song Ramuloo Ramulaa Leaves Allu Arjun Awestruck (Watch Video).

Coming to his own releases, the actor was working on Pushpa when the lockdown was imposed all over the country. With the shootings being halted, he's patiently waiting for things to get back to normal. The actor will only resume working on his next once the lockdown is lifted and let's hope it happens very soon.

(The above story first appeared on LatestLY on May 24, 2020 07:19 PM IST. For more news and updates on politics, world, sports, entertainment and lifestyle, log on to our website latestly.com).