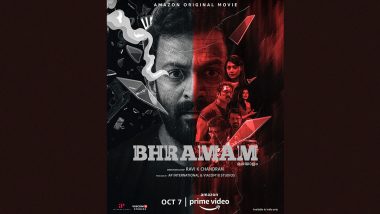 Bhramam is the remake of the Hindi film Andhadhun that had released in 2018. The Malayalam film stars Prithviraj Sukumaran, Mamta Mohandas, Unni Mukundan, Shankar Panicker and Raashi Khanna. Directed by Ravi K Chandran, Bhramam has released on the streaming giant Amazon Prime Video on October 7. There are many who have managed to watch the film and shared their views as well. Well, Bhramam has opened to mixed response from the critics. Bhramam Movie Review: Prithviraj Sukumaran and Mamta Mohandas’ Remake Comes Nowhere in the League of AndhaDhun (LatestLY Exclusive).

While some have lauded the direction and performances of the star cast, many are not impressed with this remake as it could not manage to live up to the expectations like the Hindi version. Let’s take a look at the reviews shared by critics on Bhramam.

Hindustan Times - Bhramam, however, is ultimately a massive waste of time, and a step in the wrong direction for an industry that has been consistently operating at a higher level than any other in the country. You’ll be blindsided by its blandness.

TOI - Bhramam keeps the audience interested through its 152-minute run and is definitely a novel experience for the Malayali audience. Funnily enough, this is probably not the recommendation to make in these times, but it's a movie that would be enjoyable viewing with friends or even on a date night.

Onmanorama - While the power of the story keeps us glued to the screen what have cost it dearly are the melodramatic dialogues and the mawkish reactions of characters. They appear now and then throughout the movie like sutures that leave the sequences unnatural and the drama incoherent. The jarring of the dubbing is clearly evident. The subtle humour, which was attempted painfully at odd intervals, doesn't seem to work either.

The Indian Express - Unlike the Telugu remake Maestro, the makers of Bhramam haven’t altered the very DNA of the original, by turning this movie into a hero’s journey. Instead, Bhramam doubles down on the amorality of the protagonist, reinvigorating the narration with some much-needed freshness.

Well that’s what the critics had to say about Bhramam. The film has not only been remade in Malayalam, but also in Telugu as Maestro. The Tamil remake Andhagan is under production. So what are your thoughts on Bhramam?

(The above story first appeared on LatestLY on Oct 07, 2021 11:24 AM IST. For more news and updates on politics, world, sports, entertainment and lifestyle, log on to our website latestly.com).