Best friends in real life South stars Vishal and Arya will be locking horns in their upcoming film which is titled as Enemy. The movie will be helmed by Anand Shankar who is known for directing Iru Mugan. Check out the full story. 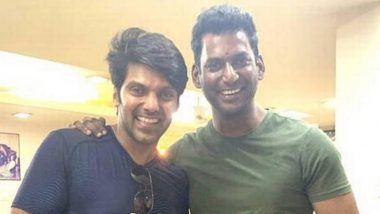 Best friends in real life South stars Vishal and Arya will be locking horns in their upcoming film which is titled as Enemy. The former took to social media and announced this news making their fans all joyous. The movie will be helmed by Anand Shankar who is known for directing Iru Mugan. However, this is not the first time Vishal-Arya will be seen together as earlier the two have worked in a critically acclaimed flick Avan Ivan which directed by Bala and had released in 2011. So, this will be their second project together. Arya Shares Pictures of His Intense Workout Session With Vishal As Gyms Reopen in Chennai (View Pics).

Actor Vishal revealed the title of the film along with an intriguing poster. The picture sees the film's name in bold letters and eyelids of the two stars looking at each other in anger. "It's final. My best friend @arya_offl is now my "ENEMY".We have no choice, except to fight it out in a battle of epic proportion. gonna be good," the actor wrote. What a quirky way to introduce the title of the film! Teddy: Arya’s Upcoming Movie Is the First Tamil Film to Use Indian Animation.

Earlier, speculations were that Vishal and Arya are indeed collaborating after a puja was held in Hyderabad before starting the shooting of the film. Reports also suggest that Mrinalini Ravi has been roped in as a female lead. Enemy will be produced by Mini Studios. How excited are you to see the two together? Tell us in the comment section below. Stay tuned!

(The above story first appeared on LatestLY on Nov 25, 2020 05:54 PM IST. For more news and updates on politics, world, sports, entertainment and lifestyle, log on to our website latestly.com).