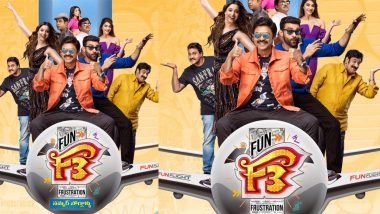 Venkatesh Daggubati is all set to win the audiences hearts with his upcoming film titled F3: Fun and Frustration. Helmed by Anil Ravipudi and produced by Sri Venkateswara Creations, the upcoming Telugu comedy has high expectations attached to it. Also, with intriguing posters, teaser and trailer, the makers have already kept fans glued. For the unaware, F3 is a standalone sequel to F2, and the second film in the Fun and Frustration series. Now, as the movie is nearing its release date, let's check some key details about it. F3 Trailer: Venkatesh Daggubati, Varun Tej, Tamannah Bhatia’s Film Promises Triple Loads of Fun and Entertainment (Watch Video).

Cast - F3 will feature Venkatesh, Varun Tej, Tamannaah Bhatia, and Mehreen Pirzada, who reprise their roles from the previous film alongside Sunil Varma and Sonal Chauhan.

Plot -  The film revolves around quite an entertaining story wherein Venkatesh and Varun run a hotel business to overcome the financial woes caused by their wives Tamannaah and Mehreen.

Release Date -  F3: Fun and Frustration is scheduled to release theatrically on May 27, 2022.

F3 Movie Review - F3: Fun and Frustration reviews are out. Click here to know what netizens have to say about Vankatesh, Varun Tej and Tamannaah Bhatia’s film.

(The above story first appeared on LatestLY on May 25, 2022 01:48 PM IST. For more news and updates on politics, world, sports, entertainment and lifestyle, log on to our website latestly.com).