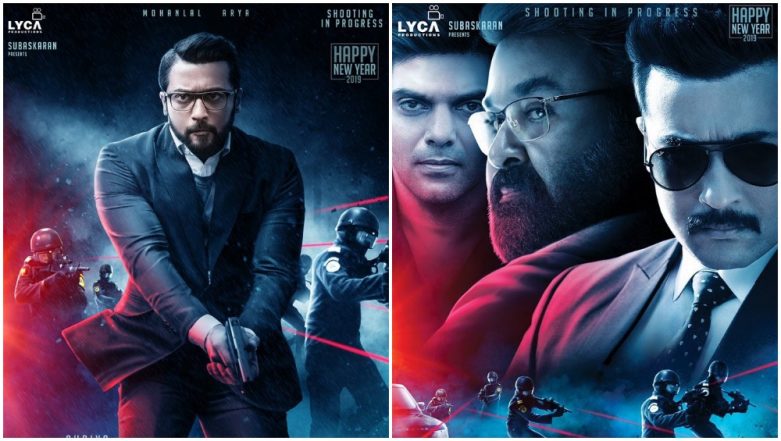 Suriya Sivakumar is teaming up with his Maatran director KV Anand for his 37th film. Considered as one of the costliest film Suriya has been part of, the makers of this film have been keeping silence over what's the new title of the film. However. Tamil movie fans know that this is nothing unusual. The titles of superstar movies are often kept under a shroud of mystery until the director or the star feels it is the right time to share the name with the fans. Suriya 37: After Mohanlal, Allu Sirish, Sayyeshaa, Now Arya Joins The Singham Superstar in KV Anand's Film

Well, the makers of Suriya 37 thought the New Year's Day was a fine time to do so, and so the movie is now called Kaappaan. Lyca Productions revealed the title at 12.10 in the morning and also shared a couple of stylish posters from the film, bathed in a glowy red colour. One poster has a bearded Suriya holding a gun and leading a tactical attack team, while another poster has him along with Malayalam superstar Mohanlal and Tamil star Arya in them. Suriya Did Something Really Special on His Birthday and It Is Truly Inspiring.

Sayyeshaa of Shivaay and Jungaa fame is the female lead in the movie. Kaappaan also stars Boman Irani and Samuthirakani. Earlier Telugu star Allu Shirish was also to be a part of the cast before he walked out and was replaced with Arya. Harris Jayaraj has scored the music for the film. The movie will release later this year. This will be the second Suriya movie to look forward to in 2019 after Selvaraghavan's NGK.