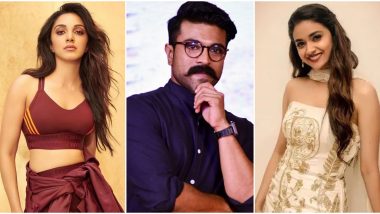 Chiranjeevi's social drama, Acharya is making headlines for all the right reasons. While we know he'd be collaborating with son, Ram Charan for the same, the latter has more of a special appearance in it. However, his role is long enough for the makers to hunt for an actress for him. Yes, Charan will have a leading lady paired opposite him in the movie and if all goes well, Kiara Advani may be roped in for it. Trisha Walks Out Of Chiranjeevi's Acharya Citing 'Creative Differences' - Read Tweet.

As per new reports, makers of Acharya want Kiara to come on board as the actress opposite Ram Charan. While Kajal Aggarwal is already the leading lady of the film, Advani will have lesser screentime. If the actress does manage to sign on the dotted lines, this would mark her second collaboration with Ram Charan after 2019 release, Vinaya Vidheya Rama. But considering the actress has multiple projects in her hand, they are also considering Keerthy Suresh for the same role. The makers are currently discussing these names and an official announcement will be made in the coming weeks. Megastar Chiranjeevi to Play Dual Roles in Koratala Siva’s Action Entertainer?

Meanwhile, SS Rajamouli is planning to resume the shooting of his next period drama, RRR. As per reports, Chiranjeevi requested the director to start shooting with Ram Charan so that his later dates are available for Acharya and Rajamouli agreed willingly.

(The above story first appeared on LatestLY on Jul 13, 2020 04:51 PM IST. For more news and updates on politics, world, sports, entertainment and lifestyle, log on to our website latestly.com).