Kurup: The Curious Connection Between Dulquer Salmaan’s Thriller and 1984 Film NH 47 That Goes Beyond Sukumara Kurup! 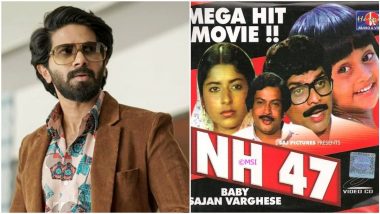 By now, you should know that Dulquer Salmaan's upcoming film, Kurup, directed by Srinath Rajendran, is based on the infamous murder accused Sukumara Kurup, known to be among one of India's longest absconding criminals. The movie is based on the real-life crime that happened in 1984, when Sukumara Kurup and his aides allegedly killed Chacko and passed his body off as Kurup's so that they can claim the insurance money on him. When their ploy was ousted, Kurup went absconding, and his whereabouts are still a mystery to the Kerala police even after so many years. Kurup Release Date: Dulquer Salmaan’s Malayalam Thriller To Hit the Big Screens on November 12!

Kurup sees Dulquer take on the absconding criminal's role, with the focus on his youth and the circumstances that lead him to carry out the murder, and the aftermath. Of course, considering how high-profile the original murder case was - Sukumara Kurup has turned into a notorious legend since - Kurup isn't the first film that tackled this case.

Watch the Trailer of Kurup:

There is also Adoor Gopalakrishnan's Pinneyum, starring Dileep and Kavya Madhavan, that was inspired by Chacko murder case and it came out in 2016. But the movie we want to talk about is Baby-directed NH 47 that came out the very same year that the murder happened.

TG Ravi played the role of Kurup in the movie, that didn't show him in the same stylish light as Dulquer is painted in the upcoming movie. An interesting casting here is that of Sukumaran, who had a cameo in the movie. A very popular hero in those times, Sukumaran played the unfortunate Chacko, who is killed and whose identity is stolen by Kurup.

And in the upcoming movie, Kurup, we will see the late Sukumaran's elder son Indrajith Sukumaran in the supporting cast. Though he would not be playing Chacko, but that of the police officer assigned to catch Kurup after the latter goes on the run. Kurup: Indrajith Sukumaran To Impress Audience As DYSP Krishnadas, A Righteous Police Officer, In Dulquer Salmaan Starrer.

Who is playing Chacko in the film is left as a mystery, as Kurup is all set to release in theatres on November 12. Kurup also stars Sobhita Dhulipala, Sunny Wayne, Shine Tom Chacko and Surabhi Lakshmi.

(The above story first appeared on LatestLY on Nov 08, 2021 07:05 PM IST. For more news and updates on politics, world, sports, entertainment and lifestyle, log on to our website latestly.com).