The filmmakers are yet to make an official announcement for the same. 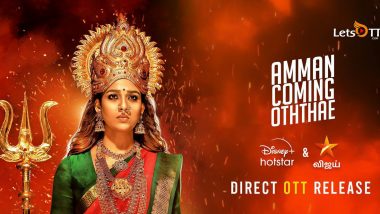 Nayanthara fans can rejoice as her upcoming Tamil movie Mookuthi Amman is on its way to release. Directed by N. J. Saravanan and RJ Balaji, it is said to be a Hindu devotional film. As per the latest reports, the movie will have a direct OTT release, just like many other regional as well Bollywood films in India. It is reported that this flick will start streaming on Disney+ Hotstar and Star Vijay in Diwali 2020. New Stills Of Mookuthi Amman Starring Nayanthara and RJ Balaji Take The Internet By Storm! (View Pics).

The filmmakers are yet to make an official announcement for the same. It is also reported that RJ Balaji has taken a 20-day-off to wrap up the formalities of the film ahead of its release. He is also seen carrying out the commentary stint for the IPL. The movie also marks as directorial debut of him.

Earlier, Balaji spoke about the film with media saying, "All the elements that were there in the devotional films that we grew up watching. It will be a nostalgic trip, but there will also be a takeaway that is relevant, especially in this present times." Speaking of the music of the film, it is handled by Girishh G. Rest of the cast includes, RJ Balaji himself, Smruthi Venkat, Urvashi, Ajay Ghosh, Indhuja Ravichandran in key roles.

(The above story first appeared on LatestLY on Oct 05, 2020 11:53 AM IST. For more news and updates on politics, world, sports, entertainment and lifestyle, log on to our website latestly.com).