After unveiling the official teaser of Telugu film Mosagallu a while back, the makers on November 13 dropped yet another teaser dedicating it to Suniel Shetty. Starring Kajal Aggarwal, Sunil Shetty and Vishnu Manchu, the flick based on true events revolve around the biggest IT scam. Check it out. 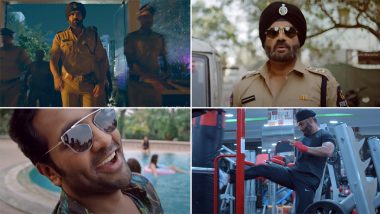 After unveiling the official teaser of Telugu film Mosagallu a while back, the makers on November 13 dropped yet another teaser dedicating it to Suniel Shetty. Starring Kajal Aggarwal, Sunil Shetty and Vishnu Manchu, the flick is based on true events and revolves around the biggest IT scam. Having said that, Suniel Shetty's first look as ACP is out and we are amazed by his persona. In the movie, Kajal and Vishnu play the culprits whereas Suniel plays the role of a cop. Mosagallu: Venkatesh Daggubati Launches the Title Motion Poster of Vishnu Manchu and Kajal Aggarwal’s Upcoming Crime Thriller (Watch Video).

The teaser sees Shetty as a badass inspector who does not spare any criminals. We also see him in action in the clip. One of the dialogues of the actor from the videos includes, ''Every criminal in my domain will be neutralized ruthlessly. No matter who he is I will hunt him down.'' FYI, apart from being the lead, Vishnu Manchu has also penned and produced the film. It is directed by Jeffrey Gee Chin. Mosagallu: Vishnu Manchu Wishes On-Screen Sister Kajal Aggarwal on Raksha Bandhan 2020 With a New Poster of Their Film (View Pic).

Not just Suniel Shetty, the teaser also sees a glimpse of Vishnu Manchu laughing and giving no damn about his wrongdoings. Mosagallu also stars Ruhi Singh, Navdeep, Naveen Chandra and Mahima Makwana in key roles. So, did you like Suniel Shetty's avatar? Tell us in the comment section below. Stay tuned!

(The above story first appeared on LatestLY on Nov 13, 2020 01:32 PM IST. For more news and updates on politics, world, sports, entertainment and lifestyle, log on to our website latestly.com).