Ragini Prajwal Speaks Up About Her Debut Film ‘Law’, Says ‘I Trust That We Will Have a Great Premier’

Debutante actress Ragini Prajwal plays the female protagonist in the upcoming Kannada film "Law", and she is excited and nervous at the same time. The film releases digitally this weekend, skipping theatrical release due to the global Covid pandemic. 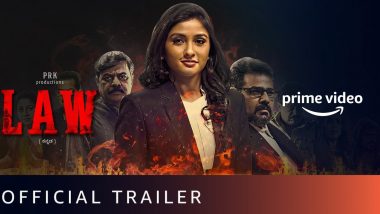 Debutante actress Ragini Prajwal plays the female protagonist in the upcoming Kannada film "Law", and she is excited and nervous at the same time. The film releases digitally this weekend, skipping theatrical release due to the global Covid pandemic. "It was more than enough for me to feel thousands of butterfly in my stomach because it is my debut film, but then the trailer released and all the response started pouring! I am on my feet now! People are accepting and ready to take on a courtroom drama. A subject like this is a progressive sign. (I am) Keeping my fingers crossed," Ragini told IANS. French Biryani On Amazon Prime: Trailer of Sal Yusuf and Danish Sait’s Kannada Film to Release on July 16!

"Considering the response we have got from the trailer, I trust that we will have a great opening when the film premiers on the OTT platform. I just want people to receive the film the way they received the trailer. I just hope the audience sees the effort and passion we put in together for the film." she added. Directed by Raghu Sarmath, "Law" also features Siri Prahalad, Achyuth Kumar, Mukhya Mantri Chandru, Krishna Hebbale, Rajesh Nataranga and Mandya Ramesh. Ragini is married to the celebrated Kannada actor Prajwal Devaraj, and according to the actress, her family has been the biggest support system in her new journey of cinema. Keerthy Suresh Starrer Penguin to Premiere on Amazon Prime on June 19! Here’s All You Need to Know About This Upcoming Film

"Prajwal has done more than 30 films in the Kannada film industry and he was recalling his debut that happened 10 years ago. Even he had that feeling of nervousness before the release of his debut film. While he is very excited and happy, he was telling me how privileged I am that the film is releasing on a digital platform with a reach of 200 countries. I agree. It is really a good fortune for me that in the digital era, my debut film is getting such great exposure. But the most excited and enthusiastic person is my father-in-law (veteran Kannada actor Devaraj).

"Every morning, since the trailer has released, he would come to us and say, 'so how many views and likes today?' he is counting on those numbers that we are getting on social media! I have a very supportive family!" smiled the actress. "Law" releases on Amazon Prime Video on July 17.

(The above story first appeared on LatestLY on Jul 15, 2020 11:34 AM IST. For more news and updates on politics, world, sports, entertainment and lifestyle, log on to our website latestly.com).