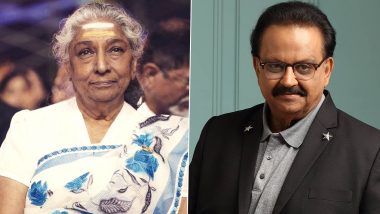 There are numerous rumours going on the health status of S Janaki, the veteran playback singer of Indian Cinema. Fondly called as Janakamma, she has recorded songs in more than 17 languages. On June 28 evening, rumours on the veteran singer’s health, citing that she has passed away, started doing rounds on social media. This false news on her demise spread like wildfire. SP Balasubrahmanyam and the legendary singer’s family members clarified that S Janaki is fine and also requested netizens to not spread rumours on her health. Mumtaz Death Hoax: Yesteryear Bollywood Actress Dismisses Death Rumours With a Video Message, Says 'I'm Alive'.

SP Balasubrahmanyam was upset with the death hoax of the legendary singer, S Janaki. He took to Facebook and shared a video message in which he stated, “Since morning I have received about 20 calls, asking the welfare of Janakiamma. Somebody has on the social media or somehow said she is no more. What nonsense is it? I talked to her and she is doing very well. You see, what happens is, people love some artists to the core, they may have a heart attack. Please use social media for positivity, don’t make fun of these things. Don't use social media for adverse things. Long live Janakiamma, she is very safe and very healthy.” Mahesh Bhatt Death Hoax: Pooja Bhatt Posts Pics of Her Father to Quash the Rumours.

Rumour alert! There are some reports that legendary singer S Janaki has passed away! These are just rumours! She is well and truly alive and just underwent a minor surgery! Please don't spread rumours! #Janaki #SingerJanaki #SJanaki #GalattaBytes pic.twitter.com/IIoB2bBwaD

S Janaki is known for association with SP Balasubrahmanyam for films. Her duets with the latter from the 1960s to 1980s had topped the charts. It was four years ago when S Janaki, who is also known as the Nightingale of South India, announced her retirement from singing for films and stage events.

(The above story first appeared on LatestLY on Jun 29, 2020 10:18 AM IST. For more news and updates on politics, world, sports, entertainment and lifestyle, log on to our website latestly.com).