Keerthy Suresh seems to be on a roll. After launching the teaser of her film Good Luck Sakhi, the actress had another big announcement lined up for August 15. The actress took to Twitter to share the first look and announce her upcoming project Saani Kaayidham. 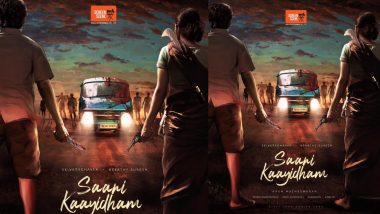 Keerthy Suresh seems to be on a roll. After launching the teaser of her film Good Luck Sakhi, the actress had another big announcement lined up for August 15. The actress took to Twitter to share the first look and announce her upcoming project Saani Kaayidham. The film will mark the acting debut of director Selvaraghavan. The filmmaker who is known for being behind the camera and has to his name some big films starring brother Dhanush such as Mayakkam Enna, Pudhupettai among others will now be facing the camera. 17 Years of Kaadhal Kondein! Dhanush Thanks His Brother, Director Selvaraghavan For The Cult Classic (View Post).

The film will be directed by Arun Matheswaran, who had recently directed the action drama Rocky starring Vasanth Ravi. The director has confirmed that Saani Kaayidham will be an action-drama and is also based around true events from the 1980s. Considering it is his debut, we bet Selvaraghavan is super excited for the same and hence whilst sharing the first look poster, wrote, "A new adventure begins! #SaaniKaayidham. Happy and excited to be a part of this amazing team! Here's our first look." As for Keerthy Suresh, the actress too shared the first look and wrote, " am very happy to join hands with the next happening director @arunmatheswaran and super excited to share the screen space with namma director @selvaraghavan sir!" The first look shows the lead characters in an action mode as he is seen holding a knife with blood dripping from it whereas Keerthy is seen holding a gun. Both are facing their backs on the first look. Good Luck Sakhi: Did You Know Keerthy Suresh's Next is Also Inspired by Sharpshooters Chandro and Prakashi Tomar?

Check Out the First Look Here:

The first look of Saani Kaayidham was also shared by Dhanush who wished his brother on his new adventure as he wrote, "#SaaniKaayidham let the world witness your acting prowess like I did selva sir."The film's release date and production schedule are yet to be announced and we are certainly excited for the same.

(The above story first appeared on LatestLY on Aug 16, 2020 08:31 AM IST. For more news and updates on politics, world, sports, entertainment and lifestyle, log on to our website latestly.com).