Samantha, who commands a huge fan base all across south India, posted a picture of herself in skiing gear and later, a video clip of herself skiing on Instagram. Check it out. 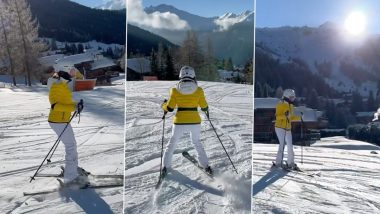 Actress Samantha, who is holidaying in Verbier, Switzerland, seems to be having the time of her life, impressing her fans with news skills that she seems to have acquired in a short span of time. Yes, the actress, it seems, has not just learned but also mastered the art of skiing within a very short period of time, much to the delight of all her fans and well-wishers, who are filled with admiration for her. Samantha Ruth Prabhu Listens To ‘Last Christmas I Gave You My Heart’ While Lazying Around With Her Pets (View Pics and Video).

The actress, who commands a huge fan base all across south India, posted a picture of herself in skiing gear and later, a video clip of herself skiing on Instagram. She said, "Day 4 is when the magic happens", adding a hashtag, "Skiing ain't easy but it sure is fun."Arrangements of Love Adaptation: Samantha Ruth Prabhu Announces Her First Global Film Based on Timeri N Murari’s Best-Selling Novel, Philip John to Direct.

Shortly, she posted a video of herself skiing a considerably long distance, and said, "Leave your ego at home they said... no truer words have been spoken."

It was not just her fans who were bowled by her skiing skills, celebrities like Priya Atlee, the wife of director Atlee, her close friend, and stylist Neeraja Kona and actress Pragya Jaiswal were also among those who were impressed.

(The above story first appeared on LatestLY on Jan 22, 2022 08:23 PM IST. For more news and updates on politics, world, sports, entertainment and lifestyle, log on to our website latestly.com).