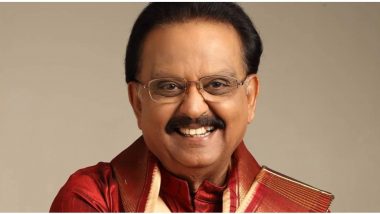 SP Balasubrahmanyam fans can finally have a sigh of relief as the veteran singer, though on the ventilator is stable currently. Earlier, the singer was admitted to Chennai's MGM Hospital after he started showing mild symptoms of coronavirus. His health, however, deteriorated further and he had to be put on a ventilator in an ICU. SP Balasubrahmanyam's fans along with his industry friends prayed for his speedy recovery and it seems like their prayers have been answered. Megastar Chiranjeevi Reveals SP Balasubrahmanyam Is Recovering, Reveals He Is In Touch With Singer's Sisters For Daily Health Updates (Watch Video).

If a new update about his health is to believe, the veteran singer has now tested COVID-19 negative. However, these reports being circulated are false and SP Charan has confirmed the same. "Kindly refrain from rumour-mongering', said the veteran singer's son in his newly released video. He was referring to the same stories and assured his fans that his father's condition is stable but he continues to remain on the ventilator.  He also insisted on being the only source of an update when it comes to SP Balasubrahmanyam's health and fans should be wary of hearing any news from anyone else. SP Balasubrahmanyam Birthday Special: Dil Deewana, Telusa Manasa - 5 Chartbuster Melodies Sung By The Legendary That Have Become Classics!

SP Balasubrahmanyam got admitted on August 5 and it's been a month since he's taking his treatment. While the doctors then had advised home quarantine to the singer, he insisted on getting admitted for the sake of his family.

(The above story first appeared on LatestLY on Aug 24, 2020 12:44 PM IST. For more news and updates on politics, world, sports, entertainment and lifestyle, log on to our website latestly.com).