All fans of Ajith Kumar eagerly look forward to the release of his films and right now all eyes are on the release if the action thriller, Valimai, which is helmed by H Vinoth. 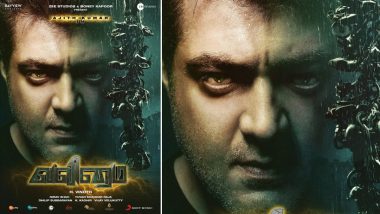 Ajith Kumar or AK or just Ajith, the superstar has fans not just in the country but worldwide. All eagerly look forward to the release of his films and right now all eyes are on the action thriller, Valimai. This Tamil film is one of the most anticipated movies of him and due to the ongoing pandemic, the makers had to delay the release of it. However, after the long wait, the film will finally be releasing in theatres for which all have started with the countdown. Valimai: These Unseen Pics Of Ajith From H Vinoth’s Film Take Internet By Storm.

Valimai, written and directed by H Vinoth, has already grabbed everyone’s attention, courtesy the intriguing posters of Ajith and the power-packed trailer. Ahead of the film’s theatrical release, let’s take a look at some of its key details.

Plot – The story revolves around a police official who is on a mission to hunt down an outlaw biker gang involved in burglary and murder. How the officer manages to get hold of the gang and succeed in his mission is something the movie buffs will have to wait to know.

Watch The Trailer Of Valimai Below:

Release Date – The Boney Kapoor produced film will hit the theatres on February 24. It will be released in Tamil, Telugu, Kannada and Hindi languages.

Review – The reviews for Ajith’s Valimai are out. Clink on the link to read LatestLY's review on this action thriller, Valimai!

(The above story first appeared on LatestLY on Feb 22, 2022 11:04 AM IST. For more news and updates on politics, world, sports, entertainment and lifestyle, log on to our website latestly.com).