Actress Jazzy Ballerini, who is making her debut in the Indian television industry with the new show Anandi Baa aur Emily, has auditioned for more than 500 times for many roles over the years. 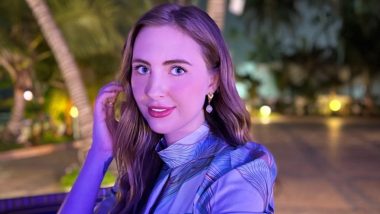 Jazzy says: "I didn't have much understanding of TV shows before I actually auditioned. But, I was excited to find out more about the role. I wanted to learn more about it. The audition process for my role on Aanandi Baa aur Emily went very smoothly. Even though it was during lockdown times. Within a few days I was confirmed for the role of 'Emily'." Saath Nibhaana Saathiya 2: Devoleena Bhattacharjee Announces Her Return to the Show As Gopi Bahu.

"I honestly didn't know, at that time, what I was getting myself into. I didn't know how amazing this opportunity really is until I started filming. When I spoke to my friends about it, they were really supportive and told me that Star Plus has one of the best content and serials. So, I'm excited to be a part of this show," concludes the actress who was born and brought up in London.

It is a story of a chaos happening in a family when a firangi bahu (foreign daughter-in-law) enters the family and Anandi Baa(played by Kanchan Gupta) tries to get rid of her. Anandi Baa aur Emily will be coming from June 27 on Star Plus.

(The above story first appeared on LatestLY on Jun 29, 2022 02:54 PM IST. For more news and updates on politics, world, sports, entertainment and lifestyle, log on to our website latestly.com).