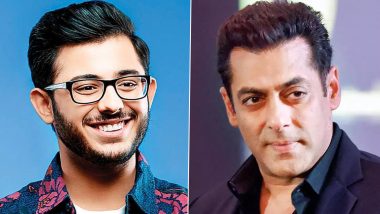 As the grand premiere of Bigg Boss 14 is nearing, fans of this controversial reality TV show are curious to know the names of the contestants who would be participating in this show. One of the names that has been doing rounds is of the popular YouTuber, CarryMinati aka Ajey Nagar. This 21-year-old is a YouTube sensation, who is known for reactions to various online topics. Before any further speculations, CarryMinati has clarified regarding his participation in the fourteenth season of Bigg Boss. Bigg Boss 14: CarryMinati aka Ajey Nagar to Be Part of Salman Khan’s Controversial Reality TV Show?

Bigg Boss 14 will see the return of Bollywood actor Salman Khan as the show’s host. YouTuber CarryMinati has shared a post on Twitter and clarified that he is not a part of this controversial reality TV show. He tweeted, “I am not going in Bigg Boss! Don’t believe in everything you read.” It was reported that this Faridabad-based YouTuber and streamer has already reached Mumbai and is under quarantine at a hotel here. It was also stated that he would be abiding by the safety guidelines issued by the authorities owing to this pandemic. Fans Share Hilarious Posts Taking a Dig at CarryMinati for Reportedly Joining Bigg Boss 14 After Roasting It on Several Occasions.

CarryMinati Issues Clarification On His Participation In Bigg Boss 14

I am not going in Bigg Boss!

Don't believe in everything you read. 😐

Bigg Boss 14 is all set to be premiered on October 3 on Colors TV. The makers had recently released the fourth promo of the show. We just cannot wait to see the Bigg Boss house and also how it would be conducted this year considering social distancing in the wake of coronavirus pandemic.

(The above story first appeared on LatestLY on Sep 16, 2020 12:37 PM IST. For more news and updates on politics, world, sports, entertainment and lifestyle, log on to our website latestly.com).