Bigg Boss 14: Devoleena Bhattacharjee Reveals She Has a Boyfriend When Rakhi Sawant Turns Cupid for Her and Rahul Vaidya!

When Rakhi Sawant tried to turn cupid for Rahul Vaidya and Devoleena Bhattacharjee. The actress made a huge revelation and replied to Bollywood's item girl that she is not single and has a boyfriend. Check it out. 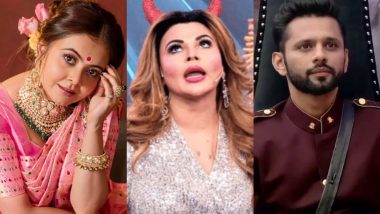 We've seen many love confessions made on Salman Khan’s controversial reality show Bigg Boss until now. Right from Rashami Desai and Arhaan Khan’s short love story on national TV to the recent Nikki Tamboli expressing that she has feelings for Aly Goni, fans have seen it all. However, what we witnessed on last night’s (January 27) episode was indeed a HUGE revelation made by the Gopi Bahu of Indian television Devoleena Bhattacharjee. Case on point, in a conversation with Rakhi Sawant, Devo admitted that she is not single and is in a relationship. Yep, you head that right! Bigg Boss 14: Netizens Slam Rakhi Sawant for Ripping Abhinav Shukla’s Underwear on National TV, Tag Her ‘Cheap'.

It so happens that Rakhi talks it out with Bhattacharjee and quizzes her if she has any feelings for Rahul Vaidya. To which Devo denies it and adds that she loves singing and so enjoys his company. Sawant being herself again pokes her about Rahul, and that’s when Devo shares that he has a boyfriend and even Vaidya has a girlfriend. Well, this is a big revelation considering that the TV star has never uttered a word about her mystery man in public. Even fans of the actress were curious to know ‘who’s the guy’. Bigg Boss 14: With Exits and Comebacks, Salman Khan's Reality Show is No Longer About Locking People Away for Months!

The conversation between the girls did not end there as Rakhi was seen asking Devoleena if it has to be just one person you can love. She asked if true love exists. To which Devo answers, “I don’t know about that but right now, I feel when someone takes care of me, values me, respects me… that is love. Love is like a habit.” FYI, Devoleena is Eijaz Khan's proxy on BB 14.

Meanwhile, the Saath Nibhaana Saathiya actress has always been vocal on social media and in real life about things that matter but always have stayed mum about her personal life. All we see on the Internet is that Devo loves her pooch and mother, but she is dating someone, big news, indeed. Stay tuned!

(The above story first appeared on LatestLY on Jan 28, 2021 04:16 PM IST. For more news and updates on politics, world, sports, entertainment and lifestyle, log on to our website latestly.com).