Bigg Boss 14: With Exits and Comebacks, Salman Khan's Reality Show is No Longer About Locking People Away for Months!

There is something unique about the ongoing season 14 of Bigg Boss, and it's not something hardcore fans would look out for. The current season is hardly what Bigg Boss is meant to be. Think about it and read the full story. 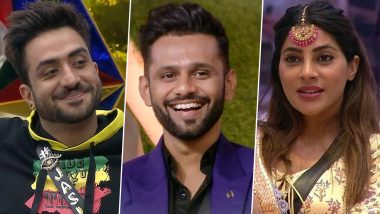 There is something unique about the ongoing season 14 of Bigg Boss, and it's not something hardcore fans would look out for. The current season is hardly what Bigg Boss is meant to be. Think about it. This show is supposed to be all about locking away a bunch of people for months inside a house and setting up a voyeur's feast with the behavioural changes that they start showing after a while as housemates. The crux of the show lies in psychological and behavioural quirks of its captive contestants, which is what made it hugely popular over 13 seasons before this. Bigg Boss 14: Netizens Slam Rakhi Sawant for Ripping Abhinav Shukla’s Underwear on National TV, Tag Her ‘Cheap'.

In season 14, the housemates are being freely allowed to walks out of the house and return according to their convenience. Older participants have been brought in as and when ratings demanded, as Toofani Seniors and then as Challengers. The essence of the show, about celebrities ditching everything from their phones to privacy over a long stretch of time, as long as they survived, is lost.

The ongoing season is also more about re-entries rather than strategy or gameplay for survival. It has left many wondering if there is any reality left in the reality show, or are the makers scurrying from one desperate attempt to another, revive a flop season. Bigg Boss 14: Rakhi Sawant Writes ‘I Love You Abhinav’ All Over Her Body; Refers to Herself As the Actor’s Girlfriend.

Breaking away from what Bigg Boss stands for, this season has also allowed established stars of past seasons hijack the limelight. The current edition is overshadowed by the presence of contestant of previous editions -- be it when Toofani Seniors Sidharth Shukla, Gauahar Khan and Hina Khan were brought in to ensure a good start, or the introduction of Vikas Gupta, Rakhi Sawant, Arshi Khan, Rahul Mahajan, Manu Punjabi and Kashmera Shah as Challengers just when the show started losing edge.

The worse thing this season, though, has to be the idea of bringing back contestants who have left. Seriously, where does that leave the spirit of contest for those who survive? "It is a revolving door this year. Everybody is coming in, everybody is going out... and then they are returning again," former Bigg Boss housemate Kashmera Shah told IANS.

"Rahul Vaidya walks out, and then comes back when he realises, ‘okay, if Aly (Goni) is back, I can also play now'. I can understand why he left, but I can't understand why he was allowed to come back. Aly comes, Vikas comes back, and Nikki (Nikki Tamboli), too, is back," she added.

The trend started with Kavita Kaushik, who was evicted in just a week. Soon, she met a panel consisting of former contestants Kamya Punjabi, Vindu Dara Singh, Devoleena Bhattacharjee and actress Surbhi Chandna, who broke down what was wrong with her gameplay and then voted in favour of her going back to the house. Bigg Boss 14: Aly Goni’s Mother Opens Up About His Son’s Friendship With Rahul Vaidya, Says ‘He Expects Trust Only From Few People’.

Here, it is important to note that the first and foremost essence of "Bigg Boss" is to stay detached from the world, which includes the views and mood of the audiences. That was lost when Kavita met up with the panel, who gave her tips, in a stark departure from the ethos of the show. The panel told her not to stretch her fight with Eijaz Khan as viewers were not liking it. She returned but soon walked out during a nasty fight with Rubina Dilaik. That started the trend of exits and comebacks.

Soon actor Aly Goni, who made no qualms to admit that he was going in to support girlfriend and actress Jasmin Bhasin, entered the show but got evicted. Just a few days later, he was back in the house with Jasmin. Then it was Nikki Tamboli, who was evicted during the mid-season finale. She made a comeback when Rakhi joined the season.

It has left the viewers with many questions about the authenticity of the show, and if there is the point in voting for their favourite contestant, and more so the eviction process. The trend continued when Rahul Vaidya made a voluntary exit, only to come back after the entry of his close friend Aly Goni. At that time, evicted contestant Jaan Kumar Sanu took a dig at Rahul's re-entry.

"Yaar ye kamaal hai. Vacation ke baad Rahul Vaidya is back! Kaash hume bhi vacation milta aisa Pavitra Punia and Shardul Pandit. Bigg Boss is becoming Bigg Resort!" Jaan tweeted at that time. The whole comeback trend became a point of contention when Vikas Gupta, who was ousted when he got physically violent with Arshi Khan, was brought back. He even left the show for the second time because of medical reasons.

At the moment, Eijaz Khan is outside the house because of acting commitments, and Devoleena Bhattacharjee has entered the house as his proxy. A proxy who stays in the house for just a few days is basically useless because, being a proxy, she could be out of season 14 before she manages to get into the thick of the action and before the game starts to psychologically affect her.

It is evident that the trend has prepared the contestants to alter their gameplay, based on the mood outside -- something which is reflected in Nikki's strategy and can explain her closeness to television couple Abhinav Shukla and Rubina Dilaik. It was even pointed out by Devoleena during a fight. Bigg Boss 14: Sonali Phogat Becomes the Latest Contestant To Get Evicted From Salman Khan’s Reality Show – Reports.

Another instance when this got highlighted was when Eijaz recently asserted that he had understood a lot of things about his game and image after coming out of the house -- which makes one wonder about the relevance of being locked up inside the house for the sake of the game.

When the contestants get locked up, they start showing their real side, and not change because of the outside view -- and that is what attracts the audience. That has gone missing from the current season. Now, all the altering and manipulation has left us wondering if this is fair to the contestants who have not left the house in the 100-plus days that the season has been airing.

(The above story first appeared on LatestLY on Jan 28, 2021 02:00 PM IST. For more news and updates on politics, world, sports, entertainment and lifestyle, log on to our website latestly.com).