Hunters Review: Al Pacino's Amazon Prime Series on Nazi Hunters is a Poorly Executed Genre-Hopping Ride From Being a Revenge Drama to a Black Comedy 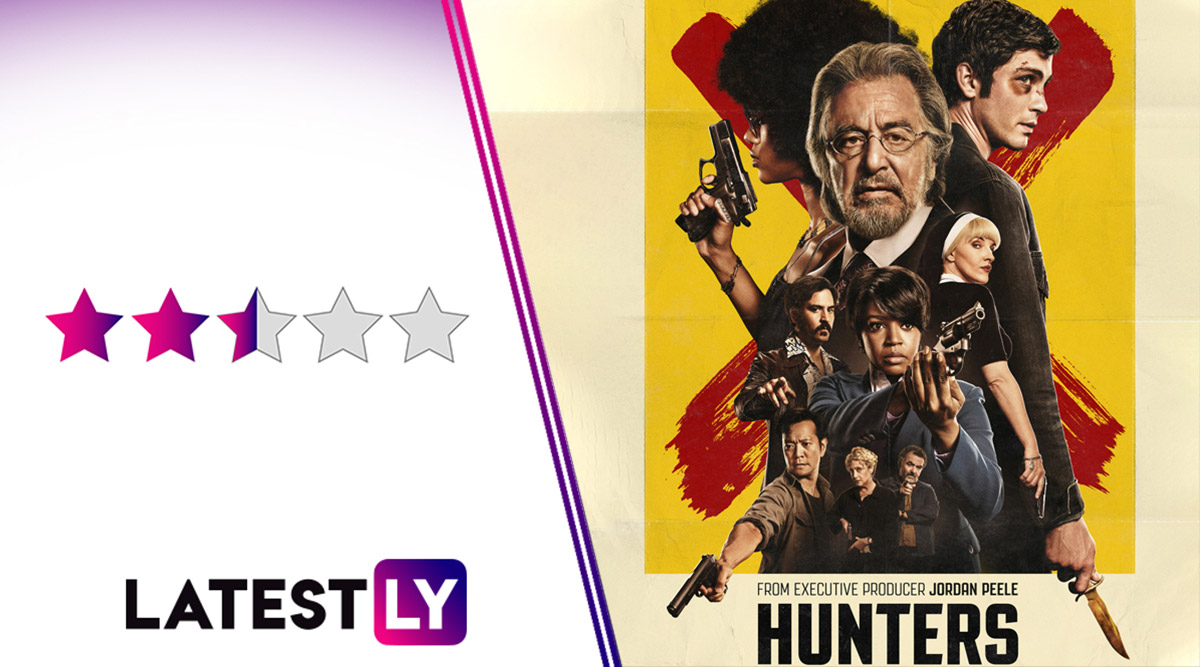 Hunters Review: From Quentin Tarantino's Inglorious Basterds to Taika Waititi's Jojo Rabbit, cinematic interpretations surrounding the Nazi atrocities on Jews have certainly advanced into something more than just emotional accounts. Somewhat building itself on Tarantino's Inglorious Basterds' idea, the new Amazon Prime series, Hunters introduces a gang of Jewish Nazi hunters led by its lead Al Pacino's Meyer Offerman, only this time it's in late 70s America. Not only in terms of the storyline but the general treatment of the series also has a Tarantino hangover to it although unfortunately not always a good one.  It is pretty much evident from the pilot's first frame itself which tries to build the whole 1970s atmosphere with its lead, Jonah (Logan Lerman) walking out of the theatre having watched Star Wars: A New Hope. Jonah is seen arguing with his friends saying "Darth Vader doesn’t get up every day looking to destroy the galaxy; he gets up every day believing he needs to save it". It's this sentiment that echoes in the series further too. Hunters: Al Pacino Defends Casting of His Jewish Nazi Character in Amazon Series.

It's the late 70s and while America is in its hippie mode, there are Nazis infiltrating US and working towards establishing a Fourth Reich. The disappearances and killings of Jews who recognise them soon begin, resulting in Meyer (Pacino) forming his own group of Nazi hunters. Meyer is a holocaust survivor whose chilling stories from the concentration camps keep coming as jolts of reality check in the otherwise comic-book-type storytelling of the show. Although, these flashbacks at some point almost seem like they may be reminders if the viewers start finding the vengeful acts of the hunters a tad too brutal.

The ten-episode revenge drama might I say gets extremely theatrical in the action bits. In fact, the opening sequence itself makes its point as a former Nazi official who's well-seeped  American disguise gets blown leading him to go on a killing rampage at his barbeque party in Florida. At the centre of the story though is Jonah (Lerman) who's reluctant to trust Meyer (Pacino) at first but is forced to see the actual 'Star Wars' battle surrounding him soon enough and becomes the Luke Skywalker to Meyer's Yoda-esque personality. As for Meyer's team of hunters, they get quite an introduction, much to my chagrin in mix of Tarantino-Guy Ritchie style. Meyer's team includes, Sister Harriet (Kate Mulvany), a nun and former member of MI6, Lonny Flash (Josh Radnor), a has-been actor,  Roxy Jones (Tiffany Boone), a Black Power activist,  Joe Torrance (Louis Ozawa Changchien), a Vietnam veteran and a couple named Mindy and Murray Markowitz (Carol Kane and Saul Rubinek), who are holocaust survivors and the team's weapon experts.

One of the major problems with Hunters though is that it constantly tries to find its tone between being an extraordinary revenge drama to a series that also seems to be an account of the horrific atrocities suffered by Jews at the hands of the Nazis and a pop-culture piece on 1970s America. It fails to keep the balance what with the constant locating-shifting narrative set to Saturday Night Fever tracks coming now and then which don't help much. The story sprawls across US and by providing us with the name of every state/city that the plot follows in a huge red font doesn't seem like the most appropriate way to keep our attention. Not to mention, subtlety goes out of the window where needed. There's no doubt that the focus on production design is huge and partly it works too. One of the biggest positives of the show is it's cinematography though which is brilliant, especially in the opening and closing shots of the episodes.

Check Out the Trailer of Hunters:

Considering the show's executive producer is Jordan Peele who directed not one but two great movies with heavy social commentary, Us and Get Out,  you almost feel a little disappointed with his judgement on this one given how it's quite a misfire. With the first episode itself being a 90-minute ride and the consequent ones an hour-long, its a shame that the plot keeps coming back to Lerman's Jonah instead of building more on the other hunters. Hunters Trailer: Al Pacino Leads a Team to Take Down the Nazis of New York in His Debut Web-Series (Watch Video).

As for the performances, there's no doubt that Al Pacino brings his A-game to this one. Unfortunately for Logan Lerman, despite his honest act, it's his character that's is a heavy let down. Among the rest of the rest of the hunters, it's Carol Kane and Saul Rubinek's Mindy and Murray that definitely impress. Greg Austin's coldblooded American Nazi hitman puts up a fantastic act. In the pilot itself, him repeatedly saying "Nines" to bowling alley manager for shoes will creep the f**k out of you!

Hunters seems to ask itself and its viewers  'do the means justify the end'  at various points but doesn't seem to have any answers for it. The ambitious show tries hard to be a revenge drama, black comedy, period drama all rolled into though unfortunately, it lacks the skill to be one. The show's scattered tone makes it hard for a viewer to truly understand its motive or even get comfortable with its extreme violent moments. Hunters seems like a missed opportunity and in the hands of someone far more skilled directors could have worked.