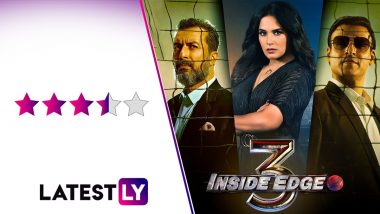 Inside Edge season 3 review: The Amazon Prime's first Indian original is in its third season. You would assume how much content can a series on betting and cricket alone can churn but Inside Edge manages to surprise you with every season. The second installment might have disappointed a few critics but we feel the third one will more than compensate for it. Inside Edge 3: Vivek Oberoi Opens Up About How His Character of Vikrant Dhawan Evolved Over the Seasons.

The rivalries continue to run deep in this season as well. While the Roy Commission investigates the match fixing allegations on PPL team Mumbai Mavericks, Vayu (Tanuj Virwani) and Rohit (Akshay Oberoi), the best players of the Indian team, are busy trying to outstage each other. Then there's Bhaisaab (Aamir Bashir) and Vikrant Dhawan (Vivek Oberoi) who continue to play mind games to pull each other down for power. Some skeletons crawl out of the closet to reveal the real faces of many. But when Mantra (Sapna Pabbi), Bhaisaab's daughter, leads a campaign to legalise betting, heads roll.

The team of writers have done a masterful job at spinning the right twists and turns without exaggerating anything. The moves are seamless and arrive at a point when you are least expecting it. What's best is there's something happening constantly and most of it you can't even guess. It's been a while we have watched a series that stays intriguing from the first episode to the last and that's highly refreshing. This installment focuses a lot on the background stories of the characters which give a lot of context to why they behave the way they do. That also defines what will happen next, so you can make the connection immediately. Display of extremely fine and very smart writing! Inside Edge Season 3 Trailer: Richa Chadha, Vivek Anand Oberoi, Aamir Bashir’s Game Gets ‘Personal, Deceptive And Dirty’ (Watch Video).

Now coming to Prakash Kanaujia which was played by Siddhant Chaturvedi till second season. While he is only mentioned in the passing, the third season gives enough context for the audience to understand where he is. Inside Edge has often borrowed instances from true-events and the tradition continues here too. Whether it's people watching the India-Pakistan match without drama or the match-fixing scandal, they say a lot without delving into unnecessary melodrama. Then there are the cricket matches which are deftly shot and performed.

But what could be a deterrent here is the one question we want to ask, what's with Sapna Pabbi's accent. It's so off and inconsistent. Renuka Shahane as the PM of India needed more room to display her character effectively. That's a good opportunity lost because in a scene where she speaks to Mantra on her campaign, Shahane manages to pique your interest with her mannerisms. Also, the character appears after several episodes which seems more like a filler than an important character. A cliched homosexual character really hurts an otherwise superb narrative, especially because it very quickly goes from being an important conflict to a neglected subplot.

Performances are yet another stellar aspect of this series. Even Vivek Oberoi has improved greatly by not being a hammy villain from the previous seasons. But the stars of the show are Aamir Bashir, Akshay Oberoi, Amit Sial and Richa Chadha. They are the powerful four of the series who hold any scene strongly. None of them ever make a slip up which elevates the viewing experience. Tanuj Virwani, Sayani Gupta, Manu Rishi Chadha and others do a good job too.

(The above story first appeared on LatestLY on Dec 03, 2021 02:17 PM IST. For more news and updates on politics, world, sports, entertainment and lifestyle, log on to our website latestly.com).