Shivani is telling PN and Radhika that she has brought the dress but wanted them to check the fittings. 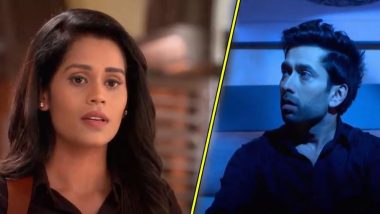 Today’s episode of Ishqbaaz starts with SSO (Nakul Mehta)and family having breakfast, Khanna comes and tells SSO that the lawyer Vajpayee has come, PN asks SSO why he has called the advocate so early in the morning. SSO tells he has some work with him and goes. Radhika, Dhruv, and Shivani ask Khanna to tell them about the truth as to why SSO has called the advocate. Khanna tells that he does not know. SSO comes and tells them why are they troubling him. Dhruv teases SSO as he is Khanna’s bodyguard, whenever he is in trouble SSO comes to rescue him. SSO takes Khanna from there. When Khaana ask SSO why he called the advocate. SSO tell that he is afraid for Radhika as when he was there he could not do anything after he goes what will happen to her, who will take care of her, thinking of all that SSO tells he has called the advocate. SSO asks Vajpayee is the paper’s ready and he signs the paper.

Shivani is telling PN and Radhika that she has brought the dress but wanted them to check the fittings. Aditi (Manjiri Pupala) comes and wishes them good morning, everyone is silent. Aditi asks where is SSO. Radhika tells PN to go and see if Shivani’s dress is proper and she will handle here. Aditi tells Radhika that she has to meet SSO, just then Sharda comes and tells her that the wedding cards have arrived and she can see it. Radhika excuses herself and goes. Aditi tells Sharda that yesterday someone was there in Shivani’s prop room, someone outsider. Sharda tells that she goes and comes in that room so many times but she has not seen anyone there. Aditi tells that she wants to check that room again. Aditi goes to the prop room and searches. Aditi thinks that something is missing from the room, this means someone has come inside this room. Aditi tells that in this house something wrong is happening and she will find out what is it.

Avi is talking in the phone and telling to Mr. Mehta that SSO has not signed any movie. SSO asks Avi did he cancel his interview with the press, Avi tells that Aasya was supposed to do. SSO asks where is Aasya. Avi tells that from yesterday night he has not seen her, he even tried her phone, she is not lifting the phone. SSO tells them to find out where is she and has she cancel the interview. Radhika comes and asks SSO why is he canceling the interview. SSO tells he does not feel like. Radhika tells don’t lie and tell her the truth, SSO tells that in every interview they ask him the same question as to when he is getting married. Radhika tells don’t tell everyone but at least tell me and laughs and runs from there.

In the prop room, Aditi enters another room, where the mask-wearing bride is dragging AAsya and taking her inside. Down Avi is tensed as to they are not able to find Aasya, Khanna tells maybe she is in some trouble. The bride with mask takes Aasya inside one room, Aditi sees her and follows her. PN tells the pest control people to fog nicely as she does not want any insects or flies to be seen. While the room is full of fog the bride with mask tries to flee from there, Aditi follows her and sees that she has crossed the fence. Aditi tells she has to say this to SSO and goes inside. PD and all are worried as there is no news of Aasya, Khanna comes and tells them that he has found Aasya’s mobile which was lying in the corridor. All get tensed. PD tells Avi to check who did she called last from her phone. Sharda comes and tells them that she has also seen her from yesterday after she came in the prop room to call her. Aditi comes and asks them where is SSO, she tells them that there is someone in the house which they all are unaware about. PN also tells that she has also seen someone on Shivani’s engagement day. Shivani panics and tells she is scared. Aditi tells them not to worry as she is there to help them. Aditi tells them that she will need their help in this. Aditi tells Dhruv that he should give the staff details.

SSO calls out PN and PN and tells them that he has changed his Will and wants them to keep it safe. PN asks why has he made a will at this age. PD tells nothing will happen to SSO and he will live many years. SSO thinks he also wants to live but does not know how much life he has and he wants everyone to be happy when he is gone. Avi comes and tells that Aasya has not canceled his interview with the press. SSO goes to attend the interview. PN and PD think why SSO has made a will. PD tells he is just like his father Shivaay, he also had made his will and flashbacks. Just then Sharda comes and PD tells her to keep the file very carefully in the locker. Sharda while going gives the keys to PD as she is not coming tomorrow for work. SSO comes down to give the interview with Rimi and jokes with her. Rimi tells him to call his family members also for the interview.

In the precap, SSO gets irritated by the reporter’s question.

(The above story first appeared on LatestLY on Jan 17, 2019 11:50 PM IST. For more news and updates on politics, world, sports, entertainment and lifestyle, log on to our website latestly.com).