The show was recently in the news for contestant Tejasswi Prakash and Rohit Shetty's arguments. Also, owing to the on-going lockdown, the show will return with fresh episodes only after the lockdown ends. 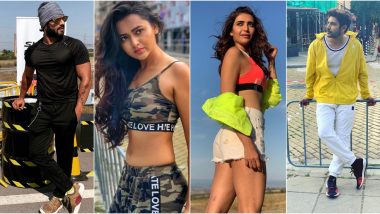 Colors' Khatron Ke Khiladi 10 has been going on for a while and has been entertaining us with not just the glamour quotient in this season's line up and also with the kind of daredevil acts that this season's contestants have been delivering. The 10th season of Fear Factor: Khatron Ke Khiladi consisted of Karishma Tanna, Adaa Khan, Amruta Khanvilkar, Karan Patel, Tejasswi Prakash, Shivin Narang, RJ Malishka, comedian Balraj Syal, Bhojpuri star Rani Chatterjee and choreographer Dharmesh Yelande, out of which a few actors have been eliminated. Khatron Ke Khiladi 10: No Fresh Episodes of Fear Factor From The Coming Weekend (Deets Inside).

Until now, Khatron Ke Khiladi 10 was telecasting fresh episodes but in an interaction with the media, Karishma Tanna had revealed that come this weekend, the show will stop telecasting fresh episodes. And while the contestants have been making it to the news for their performances, a list of their rumoured paycheques. While Karan Patel being the highest-paid contestant on the show is already out in the media, as per the list, Dharmesh Yelande and Karishma are close behind. Khatron Ke Khiladi 10: Rohit Shetty Wraps Up Shoot in Bulgaria in His Signature Style (Watch Video).

The show was recently in the news for contestant Tejasswi Prakash and Rohit Shetty's arguments. Also, owing to the on-going lockdown, the show will return with fresh episodes only after the lockdown ends.

(The above story first appeared on LatestLY on Apr 03, 2020 07:31 PM IST. For more news and updates on politics, world, sports, entertainment and lifestyle, log on to our website latestly.com).