Kim's Convenience: Simu Liu Opens Up About His Disappointment With the Producers of the Beloved Show

Simu Liu has revealed why his beloved show "Kim's Convenience" is ending abruptly after its fifth and final season. The popular Canadian sitcom ended its run after the departure of creators Ins Choi and Kevin White with producers expressing their inability to continue the show. 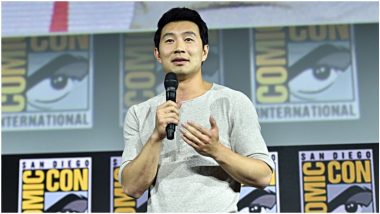 Shang-Chi star Simu Liu has revealed why his beloved show "Kim's Convenience" is ending abruptly after its fifth and final season. The popular Canadian sitcom ended its run after the departure of creators Ins Choi and Kevin White with producers expressing their inability to continue the show. Liu, who played Jung Kim on the show, took to Facebook to express his disappointment with the circumstances surrounding the show's end and called out its "overwhelmingly white" producers for moving forward with a spin-off series focused on the only non-Asian person in the show's key cast, Nicole Power's character Shannon. Simu Liu Wraps 'Kim's Convenience' Season 5.

The final season dropped on Netflix on Wednesday. "Season five of 'Kim's Convenience' comes out on Netflix today, and I'm feeling a host of emotions right now. It is, of course, our last season, thanks to a decision by our producers not to continue the show after the departure of two showrunners," Liu said.The actor went on to list the problems in his bid to dispel some of the "speculation" surrounding the show's end. "The show can't be 'saved'. It was not 'cancelled' in a traditional manner, i.e. by a network after poor ratings. Our producers (who also own the 'Kim's Convenience' IP) are the ones who chose not to continue. Neither CBC nor Netflix own the rights to 'Kim's Convenience', they merely license it. Shang-Chi Star Simu Liu Offers Hopeful Promise to Fans Disappointed by No-Show of His Marvel Film Trailer During Super Bowl 2021.

"However, the producers of the show are indeed spinning off a new show from the Shannon character. It's been difficult for me. I love and am proud of Nicole, and I want the show to succeed for her... but I remain resentful of all of the circumstances that led to the one non-Asian character getting her own show. And not that they would ever ask, but I will adamantly refuse to reprise my role in any capacity," Liu said. The 32-year-old Chinese-Canadian actor, who becomes the first actor of Asian origin to headline a Marvel superhero movie in "Shang-Chi and the Legend of the Ten Rings", said he wanted to be a part of the sixth season, contrary to rumours about how he had become "suddenly too 'Hollywood' for Canadian TV".

"This could not be further from the truth. I love this show and everything it stood for. I saw firsthand how profoundly it impacted families and brought people together. It's truly SO RARE for a show today to have such an impact on people, and I wanted very badly to make the schedules work," he said. Liu said despite his willingness to stay with the show, he was "growing increasingly frustrated" with the stagnation of the character he portrayed on the show and also "with the way I was being treated". He said the Asian-Canadian cast was not given a chance to include their lived-in experience from the "overwhelmingly white producers".

"I can appreciate that the show is still a hit and is enjoyed by many people... but I remain fixated on the missed opportunities to show Asian characters with real depth and the ability to grow and evolve," Liu said. The actor agreed that they did not always get along with each other and at times he felt like the "odd man out or a problem child" but he tried to always put up a united front in front of the press despite "decreasing screen time, and losing out on opportunities"."LA became the new territory for me, and I pursued it with so much drive and vigour partially because I knew that I could not rely on Kim's to take my career where it needed to go, nor could the cast be the type of family that I had imagined," he said.

The success and the popularity of the show, according to Liu, did not translate into better pay for the cast."We were paid an absolute horse**** rate. The whole process has really opened my eyes to the relationship between those with power and those without," he added. Liu said despite the sadness over the show's abrupt end, he is touched by the love from the fans. "I still believe in what the show once stood for; a shining example of what can happen when the gates come down and minorities are given a chance to shine," he said.