Marvel’s What If…?: Did a Car Ad Just Spoil the Final Battle of Disney+ Series?

Marvel recently struck a new deal with Hyundai to promote its cars in the show, and they might have possibly spoiled what we might see in the finale. In an ad posted to twitter you can see our heroes fighting a swarm of Ultron bots. Read on. 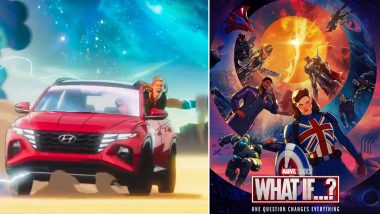 Marvel’s What If…? Just had its worldwide premiere yesterday on Disney+ Hotstar. The first animated venture by Marvel Studios, What If…? Begs the question of what would happen if a single moment would change the trajectory of the universe. The first episode features Peggy Carter where she ends up becoming a super soldier instead of Steve and giving a fun twist to the events of Captain America: The First Avenger. What if…?: From Chadwick Boseman to Robert Downey Jr, Who’s Returning and Who’s Not From Avengers Cast To Voice Their Characters in Marvel’s Anime Series (SPOILER ALERT).

With the show creating alternate events of some iconic MCU moments, viewers can expect themselves to be surprised. With many speculating that What If…? Might have grander implications on the future of the MCU, it looks like all the marketing material has been hinting towards a big finale. Marvel recently struck a new deal with Hyundai to promote its cars in the show, and they might have possibly spoiled what we might see in the finale. In an ad posted to twitter you can see our heroes fighting a swarm of Ultron bots. What If? Review: Marvel’s Disney+ Animated Series Is Daring, Fun and Loaded With Surprises (LatestLY Exclusive).

The ultimate #WhatIf Guardian of the Multiverse has arrived, the one we've all been waiting for...wait is that Hyundai?pic.twitter.com/1k5pypqWRj

In the video we can clearly see Captain Carter, T’Challa, Doctor Strange and Thor fighting an army of Ultron bots. It even features Thor in a Hyundai which I don’t know will happen in the actual show, but it still gives us a hint that this is what we can expect from the final episode. How this episode may play into the show, but it has been previously stated that Ultron will wield all the six infinity stones.

The most interesting part about this is the ad clearly shows the Watcher interfering in the final battle. The Watcher states in the first episode that he won’t interfere in the events of the show, but with clearly being in the thick of the battle, it is interesting to speculate what got him to break the rule. The entire situation just seems weird considering that it’s a Hyundai ad that spoiled one of the key events from the show, but it is still rather hilarious. Here is hoping that Hyundai even leaks that Spider-Man: No Way Home trailer. The first episode of Marvel’s What If…? Is streaming now on Disnet+ Hotstar.

(The above story first appeared on LatestLY on Aug 12, 2021 09:02 PM IST. For more news and updates on politics, world, sports, entertainment and lifestyle, log on to our website latestly.com).