Nitish Bharadwaj Birthday: Did You Know That Television's Most Loved Krishna Had REFUSED The Role In B.R.Chopra's Mahabharat? 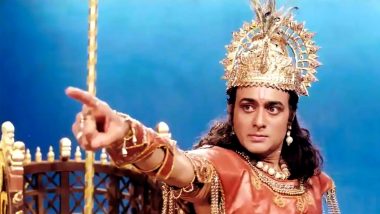 The love and craze that actor Nitish Bharadwaj received when he played Lord Krishna in B.R.Chopra's Mahabharat, returned manifold when DD decided to re-run the mythological show during the lockdown. The first-ever Lord Krishna of television was a huge rage back then and even now is. And it can safely saw that he was destined to play the role. And here's why!! Nitish Bharadwaj had gone on to reveal that he had first did not want to play the role of Krishna and he had to be convinced a lot. Instead, he was the first cast as Vidur, then replaced, offered to play Nakul and Sahdev's role in the show, but rejected that too because his heart was set on Abhimanyu's. Vishnu Puran Actor Nitish Bharadwaj Says Ved Vyas Talked About Evolution Before and in More Details Than Charles Darwin.

Revealed the actor to Hindustan Times, "When I was first cast as Vidur, I was called to the Seth studios for the shooting. When I was in the makeup room, Virendra Razdan came up in costume and said he was playing Vidur. I said, ‘How can you play Vidur? They have called me for the shoot’. He said ‘look at me, I am even wearing the costume and going to give my shot’." Nitish Bharadwaj Reacts on Being Called 'Diplomatic' By Mukesh Khanna, Says 'It Helps In Not Hurting People Unnecessarily'.

He further revealed, "I went inside to meet Ravi ji (Ravi Chopra), we had already done two ad films together and knew each other. He asked me to wait till he finished his lunch. He then told me, ‘You are hardly 23-24. After a few episodes, Vidur is going to be an old man. It won’t look appropriate’. After that, I was jobless as far as Mahabharat was concerned." Nitish Bharadwaj, Actor Who Played Krishna on Mahabharat, Joins Social Media as Show Returns on DD National.

He then went on to reveal that he was offered the role of Nakul and Sahdev but rejected hat too because he wanted to play Abhimanyu.

He then revealed that after a few days, he got another call from the Mahabharat team to play the lead character of Lord Krishna. Divulging that he literally 'dodged' the role, Nitish went on to say, "I was told to call back my mother who told me that Gufi Paintal had called up, saying they wanted to screen test you for Krishna. I told her to say no as I felt I couldn’t do it. She used her wisdom and told Gufi that I was shooting in Kolhapur and she would be able to inform me about his offer only when I return."

Once Nitish returned from the schedule of his Marathi film when he bumped into BR Chopra. Nitish went on to confess, "He got to know that I was there. He asked me ‘what is your problem, I am calling you for screen test, why are you avoiding?’ I told him ‘You need a more experienced person, how can you have a new person playing the mahanayak (Krishna)’. He said ‘you always wanted to play a good role, at least appear for the screen test’."

And that's how Nitish Bharadwaj went on to get cast in the role of Lord Krishna, a role that made him an overnight star. And can we say we are absolutely glad that it finally happened for Nitish? Happy Birthday Rockstar!

(The above story first appeared on LatestLY on Jun 02, 2020 09:00 AM IST. For more news and updates on politics, world, sports, entertainment and lifestyle, log on to our website latestly.com).