Priyanka Chopra will Play a Superhero... Not in Marvel or DC but on Netflix's 'We Can be Heroes'

Yes, Priyanka Chopra is on board to star in a superhero movie but it's neither with Marvel nor DC. The actress will be in fact a part of web series, We Can Be Heroes, directed by Robert Rodriguez. The director has earlier helmed Alita: Battle Angel. 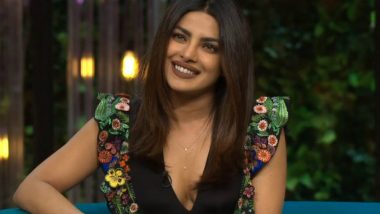 Expect the unexpected when it comes to Priyanka Chopra. The actress is already in talks to produce and star in a biopic on Ma Anand Sheela - the closest aid to Rajeesh Osho and now we hear some superhero plans coming from her camp. Yes, the Bollywood beauty is set to have a superhero outing but it's neither for Marvel or DC. The actress, in fact, is set to return to Netflix for their next show, We Can Be Heroes.

This Netflix's series will be written, directed and produced by Robert Rodriguez who earlier directed Alita: Battle Angel. And speaking of the show's storyline, it's about alien invaders who kidnap Earth’s superheroes. And now the kids of these superheroes will have to team up and learn to work together to save their parents and the world. Besides PeeCee, the show includes Christian Slater, YaYa Gosselin, Akira Akbar, Andrew Diaz, Andy Walken, Boyd Holbrook, Hala Finley, Isaiah Russell-Bailey, Lotus Blossom, Lyon Daniels, Nathan Blair, Sung Kang, Vivien Lyra Blair, Adriana Barraza, Christopher McDonald and Pedro Pascal.

This is not the first time when Priyanka Chopra's name has been popped to play a superhero. Earlier there were reports about her being considered for Marvel's Kamala Khan - a Pakistani female superhero. And when the Russo brothers revealed their wish to work with the actress in future, fans started speculating if she was on board for Marvel's next outing. Though that's a distant dream, we can still see her in a superhero costume, thanks to Netflix.

(The above story first appeared on LatestLY on Aug 22, 2019 09:33 AM IST. For more news and updates on politics, world, sports, entertainment and lifestyle, log on to our website latestly.com).