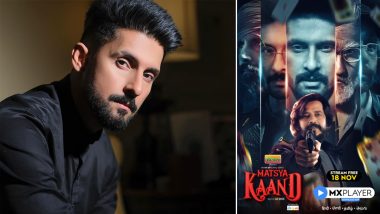 Actor Ravii Dubey is all set to play the lead role as Matsya Thada in MX Player's Matsya Kaand. His character in the web show looks intriguing as he's the protagonist and the con man in the crime-thriller show. The synopsis of the web show reads, "Matsya Thada (Dubey) is an honourable con artist, who instead of using his brawn, conducts his 'kaand' with aptitude, intelligence and charm. He's known for pulling off some of the country's most daring and biggest cons and he always manages to get past the cops as he moves from one operation to the next." Recently, we at LatestLY got a chance to interact with Dubey, and must say it was a fantastic conversation. Matsya Kaand: Zoya Afroz Talks About Playing Urvashi in MX Player’s Thriller Series, Calls the Web Show ‘A Roller Coaster Ride’ (LatestLY Exclusive).

When asked about his lead role as Matsya Thada he said, "It is essentially a con man character who's much more dependent on his brain, so you will not see him fighting his way out on situations or punching, kicking with actions. The biggest strength of my character is he's a mimicker, he's a master of disguises, so this makes my role very interesting and he is an unconventional criminal and therefore looks at himself as an artist." Matsya Kaand Trailer: Ravii Dubey and Ravi Kishan Lock Horns in This Intriguing MX Player Series (Watch Video).

Next, when asked about his experience of sharing the screen with Zoya Afroz and Ravi Kishan, he mentioned, "It's been a terrific experience, one full of learning because the seniors I would say they have been so helpful and great. There's so much to learn from the cast of Matsya Kaand. And, with Zoya she's a very beautiful person and she just had a fantastic victory in her life recently, for that I even congratulated her. Overall, I just had a ball of a time with the whole cast."

When asked about portraying 1 1 characters in 11 episodes Dubey unveiled, "They are 11 disguises actually and the character here is the mastermind. It's been a beautiful experience I won't be using the word challenging because these type of things makes you move forward. So, I have had a great time doing it. Even though, it required me to sit in the make-up chair for 4 to 5 hours before coming on the floor and then kinda being there, completely invested in the character for the next 12 hours whether it's hot, wet, cold or whatever it is, it's been the most exciting part kinda being fortunate enough to have prosthetic on the face for carrying all the roles perfectly, it's a beautiful journey."

When asked about his next projects Dubey shared, "There are several things but can't unveil now." When asked about his favourite show on OTT he said, "I am watching Peaky Blinders right now, and I am really liking it." Lastly, Dubey mentioned why viewers should watch the series Matsya Kaand, "I think if you like larger than life story, thriller minute, if you're a '90s kid like me who is still connected to the cinemas of '90s, that individual will surely love it. Because this tale is very similar to the kind of cinema we have grown up watching, so you would really gonna enjoy the characters, beautifully written one-liners, the background score is just amazing and you'll never expect what's coming your way in the episodes. Because it's literally a thriller-minute."

Matsya Kaand, the upcoming thriller series will drop on MX Player on November 18. The web show revolves around a right-minded con man Matsya Thada (Dubey), who is the ruler of under cover fraud. Besides Dubey and Zoya, the show also Piyush Mishra, Kishan, Madhur Mittal, Rajesh Sharma, Ritvik Sahore and Naved Aslam among others and is helmed by Ajay Bhuyan.

(The above story first appeared on LatestLY on Nov 17, 2021 11:30 AM IST. For more news and updates on politics, world, sports, entertainment and lifestyle, log on to our website latestly.com).