'Barish Aayi Hai', composed by composer duo Javed-Mohsin, has lyrics by Kunal Vermaa. The song will hit the airwaves on July 14 under the music label VYRL Originals. 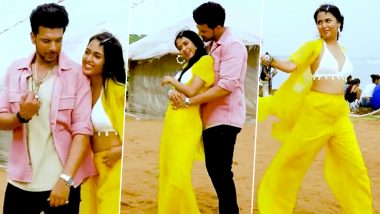 The superhit song series 'Baarish' crooned by Stebin Ben, will soon see one more addition, this time starring celebrity couple Tejasswi Prakash and Karan Kundrra, who fell in love during Bigg Boss Season 15. Titled 'Baarish Aayi Hai', the track has been performed by Stebin Ben and Shreya Ghoshal and is touted to be the biggest monsoon song of the season. Lovebirds Karan Kundrra and Tejasswi Prakash’s Romantic Pics Take the Internet by Storm!

The makers of the song released the BTS (behind the scenes) from the song's shoot on Thursday where the love birds can be seen in each other's company.The music video of the first track 'Baarish' from the series, which was released in 2020, featured Mohsin Khan and Shivangi Joshi. The second track, which was released almost a year ago, had Hina Khan and Shaheer Sheikh, as their characters are shown dealing with a turbulent break up in the middle of a shooting schedule. Tejasswi Prakash Wishes Beau Karan Kundrra in Punjabi on Valentine’s Day and It’s Damn Cute (Watch Video).

'Baarish Aayi Hai', composed by composer duo Javed-Mohsin, has lyrics by Kunal Vermaa. The song will hit the airwaves on July 14 under the music label VYRL Originals.

(The above story first appeared on LatestLY on Jul 07, 2022 02:25 PM IST. For more news and updates on politics, world, sports, entertainment and lifestyle, log on to our website latestly.com).