The Family Man 2 Teaser: Manoj Bajpayee Has Gone Incognito and We Wonder When Will Return Back for Some Action (Watch Video)

We do see a glimpse of Manoj in action but that the extent of any clue that the makers have shared about him. Samantha Akkineni covering her head in a cloth also appears at the end of the teaser. 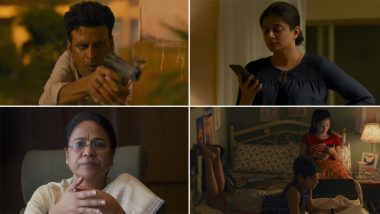 The day has finally arrived and everyone asking for updates about The Family Man can now relax. The makers of the series have unveiled the official teaser od the show, giving you a glimpse into what will happen in Srikant Tiwari's life next! The teaser shows Manoj Bajpayee's family, his colleagues and his boss looking for him while a dangerous secret mission is being laid out somewhere. The teaser leaves the fans guessing if he is returning to take up this mission or not. The Family Man: 7 Things We Expect to See Happen in Season 2 of Manoj Bajpayee’s Amazon Prime Original Series.

The teaser begins with Priyamani and Manoj's kids wondering where he is. Snaps of his colleagues looking out for him and being worried about his whereabouts take the teaser forward. Then Dalip Tahil's voice comes in asking if they can count on Manoj Bajpayee to carry out a mission. We do see a glimpse of Manoj in action but that the extent of any clue that the makers have shared about him. Samantha Akkineni covering her head in a cloth also appears at the end of the teaser which will surely intrigue all her fans.

The series marks Samantha's digital debutant and the sequel is expected to up the ante with the actress coming on board for the series. The first season received a lot of praise for adding humour to the mix of a man who is an undercover agent busting sinister terror plots. The new season of the 2019 action OTT series will also star, Sharib Hashmi, Sharad Kelkar, Seema Biswas reprising their roles. The Family Man Season 2: Samantha Akkineni Says She Has Broken a Lot of Rules for Manoj Bajpayee’s Amazon Prime Show.

Talking more about Raj and DK's show, it is an action-drama series, which narrates the story of a middle-class man. He works for a special cell of the National Investigation Agency and the series outlines his tight struggles to strike a balance between his secretive high-pressure job and being a family man. The Family Man will premiere on Amazon Prime Video on 12 February 2021 in over 240 countries and territories worldwide.

(The above story first appeared on LatestLY on Jan 13, 2021 01:49 PM IST. For more news and updates on politics, world, sports, entertainment and lifestyle, log on to our website latestly.com).