The season 2 of The Mandalorian has begun streaming on Disney+ Hotstar. The first episode is directed by Jon Favreau, and stars Pedro Pascal and Timothy Olyphant. Also has Internet's most adorable meme, Baby Yoda! 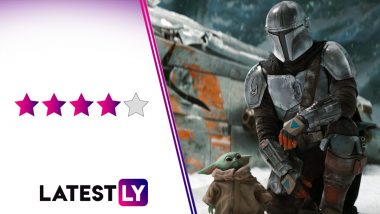 The Mandalorian Season 2 Episode 1 Review: Thank God for The Mandalorian! And thank God for Jon Favreau! Otherwise I would have belonged to that generation that saw Star Wars the franchise disappointing us twice through its prequel and sequel series. The Mandalorian came at a time when, after a decent first film in the Skywalker Saga, the Star Wars movie series begin to show cracks. Even though the action of The Mandalorian is limited to the small screen, Favreau, who revolutionised blockbuster entertainment through Iron Man and The Jungle Book, didn't compromise on Star Wars aesthetics. Ahead of Mandalorian Season 2 Premiere on Disney+ Hotstar, Star Wars Fans Flood Twitter with Hilarious Baby Yoda Memes (Read Tweets).

The space battles might be kept to minimal here, but we still get to see some impressive animal and space beings designs, terrific production design in creating outworldly planets and fantastic action sequences. And of course, who can forget Baby Yoda, who turned into an instant internet sensation, the most he made his appearance at the end of the first episode.

But what makes The Mandalorian works is how it uses the genre of Westerns to create a fascinating story for its badass bounty hunter, Din Djarin aka Mando (Pedro Pascal), while keeping the story away from the now contrived Skywalker saga (though still offering nods towards the legacy). The Mandalorian: Disney Plus Series' Third Season is Already In the Works.

The season 2 continues on this impressive footing, as Mando, on his mission to return Baby Yoda to his species, decides to seek if there is any Mandalorian left. In that pursuit, he finds himself in the familiar planet of Tatooine, where we are greeted by a surprising Easter egg, Timothy Olyphant's winning appearance and an awesome action sequence, as a couple of familiar gangs return.

Watch The Trailer of The Mandalorian Season 2:

I won't spoil too much saying about the episode, except harp on the fact that it is one of the most fun episodes I have seen of any show this year. And it certainly has the most awesome-y Star Wars action to cull away the disappointment meted out by The Rise of Skywalker. The premiere of season 2, directed by Favreau himself, works more as a standalone episode (though it offers enough hints at where it is heading to), but it leaves little to complain. Save for the fact that Baby Yoda only gets to coo and flap its hairy green ears, as it is relegated to being witness of the action around it.

Otherwise, what else can you do other than squeal in excitement and anticipation when two enemy forces join hands to take down a huge dragon that seems to be a fan of Kevin Bacon's Tremors! Or try and hide your surprise when a fan-favourite character walks into a pub, only to drop an even bigger surprise.

The special effects continue to be impressive, especially in the last action -setpiece, which also allows to showcase some amazing IMAX camerawork. The acting remains topnotch, with Pascal continuing to doing great voiceover work for Mando, while I seriously hope to see more of Olyphant in the upcoming episodes.

- Baby Yoda Stuck in Being His Internet Charmer Mode

The Mandalorian Season 2 takes off to a fantastic start, and is guaranteed to win over all the Star Wars fans disappointed with how the last film ended. Like me. Fingers crossed that the season continues this splendid momentum ahead in warp speed! The Force is definitely strong in this one! The Mandalorian is streaming in India on Disney+ Hotstar.

(The above story first appeared on LatestLY on Oct 30, 2020 06:24 PM IST. For more news and updates on politics, world, sports, entertainment and lifestyle, log on to our website latestly.com).