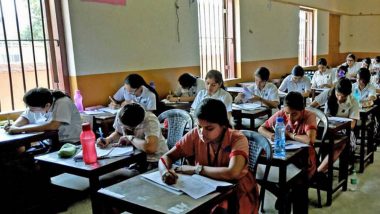 Patna, August 7: Over two lakh students of class 10th and 12th, who appeared for the Bihar School Examination Board (BSEB) examinations and failed in one or two subjects, were promoted by the board. All those students were passed by BSEB to avoid compartmental exams in the time of COVID-19. Candidates who appeared in the BSEB 10th and 12th board exam 2020 can check their scores online at onlinebseb.in.

According to a report, published by the Hindustan Times, the BSEB decided to provide grace marks to those class 10th and 12th students and pass them, as conducting the compartmental exam in the time of COVID-19 is a difficult task. BSEB 10th Result 2020 Declared: Check Bihar Board Class 10 Matric Exam Scores Online at biharboardonline.bihar.gov.in.

Earlier on May 24, the state board declared the class 12th results and the class 10th results were announced on May 26. As per the data, the BSEB had promoted 214287 students -- out of 340633 failed students in class 10th and 12th examinations. The BSEB promoted only those students whose marks were closer to the pass mark.

Steps to check the results online:

2) Click on the link displaying on the screen that reads:

3) Fill in roll number as given in your admit card.

4) The new scorecard will be displayed on the screen.

(The above story first appeared on LatestLY on Aug 07, 2020 08:51 AM IST. For more news and updates on politics, world, sports, entertainment and lifestyle, log on to our website latestly.com).