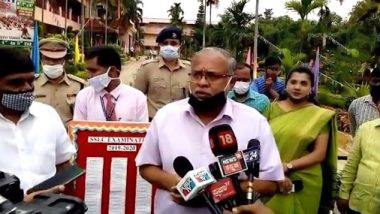 Bengaluru, June 29: Karnataka will take a decision to re-open schools across the state after July 5, state Education Minister S Suresh Kumar said on Monday. According to a tweet by ANI, Kumar was quoted saying that parents have asked the government to re-open schools only after August/September. Talking about online classes, the minister said that no online classes will be conducted for LKG & UKG students, adding that schools should interact with students on phone twice a week.

Kumar said for classes 1-10, the Centre has laid down guidelines based on which the Karnataka government has formed an expert committee. "Once the committee submits its recommendations, we will decide the next course of action", he said. Earlier this month, the Karnataka government had issued orders to stop live virtual classes conducted by schools for students of lower kindergarten (KG), upper KG up to the Class 5. Kumar had said that strict action will be taken if schools collect more fees in name of online education.

For classes 1-10, Centre had laid down guidelines. Based on the guidelines and what we have done in the past, we have formed an expert committee. Once the committee submits its recommendations, we will decide the next course of action: Karnataka Education Minister https://t.co/IF9mYGDNCK

On Sunday, 1,267 new cases of COVID-19 and 16 deaths were reported in Karnataka, according to information provided by the State Health Department. The total number of COVID-19 cases in Karnataka touched 13,190, including 783 cases from Bengaluru Urban. While 7,507 patients have been discharged after treatment, 207 deaths have been reported, said the health department.

In Bengaluru, a complete lockdown would be imposed on every Sunday, beginning from July 5, a statement issued by Karnataka Chief Minister's Office (CMO) said. The night curfew timing was also changed, as the restrictions would now come into effect every evening at 8 pm, instead of 9 pm at present.

(The above story first appeared on LatestLY on Jun 29, 2020 01:09 PM IST. For more news and updates on politics, world, sports, entertainment and lifestyle, log on to our website latestly.com).