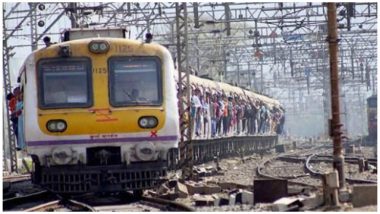 Mumbai, September 12: Students appearing for various exams are permitted to commute by special local trains in Mumbai on the exam days. The Central Railway, which oversees local train operations on central, harbour and trans-harbour lines, ahead of the NEET and final year exams of graduate courses, said students appearing for exams will have to show their college ID and admit cards to commute via special local trains. NEET Exam 2020: Western Railway to Run Three Pairs of Trains Between Vapi-Ahmedabad, Somnath-Ahmedabad And Nimach-Bhopal For Aspirants.

Union Railway Minister Piyush Goyal had on August 31 announced that students appearing for the NEET can commute via special local trains in Mumbai. "With reference to the permission from Ministry of Home Affairs (MHA) and Government of India, candidates who are appearing for NEET and JEE, being conducted in September 2020, are permitted to travel by special suburban services over Mumbai Suburban Network of Central and Western Railways," Goyal had said.

(The above story first appeared on LatestLY on Sep 12, 2020 11:24 AM IST. For more news and updates on politics, world, sports, entertainment and lifestyle, log on to our website latestly.com).