Barcelona has already secured two free transfer signings this season. Speaking of free transfers, some of them have made huge impact in the history of the game. Here are 10 such free transfers, all of which which turned out to be memorable ones. 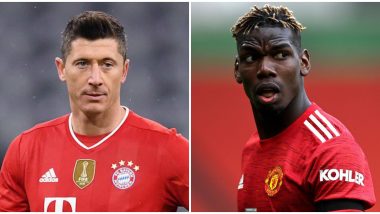 1) Robert Lewandowski: Probably the most changing free transfer in history, Robert Lewandowski moved from Borussia Dortmund to German arch-rivals Bayern Munich in 2014. And he made an instant impact at the Allianz Arena. Netting 30 goals in his first full season with Bayern Munich, he has turned out to be one of the most dependable strikers, leading them to win five Bundesliga titles.

2) Andrea Pirlo: One of the game's most prolific midfielders, Andrea Pirlo went on a free transfer from AC Milan to rivals Juventus after a successful spell at San Siro. The midfield maestro then went on to play a crucial role in Juventus winning the Serie A title for four consecutive seasons.

3) Paul Pogba: Unable to impress Sir Alex Ferguson at Manchester United, the French midfielder left for Juventus in 2012. The very next year, he won the Golden Boy award and went on to clinch four Serie A titles. His form impressed Manchester United, who then went on to buy him back for a whopping £89 million in 2016, the most expensive transfer at the time. He won the Europa League with United in 2017. Cristiano Ronaldo Transfer Update: Manchester United Reportedly Looking for a Swap Deal With Juventus, Could Exchange Paul Pogba for CR7

4) Cafu: The famous full-back arrived on a free transfer to AC Milan in 2003 and then went on to secure the Serie A in his first season at San Siro. He also won the Champions League with AC Milan in 2007 before retiring a year later.

6) Michael Ballack: Already an established performer for Germany and Bayern Munich, Chelsea got the midfielder on a free transferun 2006. Ballack had won German Footballer of the Year award for three consecutive prior to that move. And his time at Chelsea proved to successful as well. He won two Premier League titles, one FA Cup and one League in his four years at the Stamford Bridge.

7) Miroslav Klose: Miroslav Klose was a prolific striker for Germany and Bayern Munich and Serie A club Lazio didn't think twice to land him on a free transfer when his contract expired with Bayern in 2011. He went on to score a total of 63 goals for Lazio in his 170 appearances and played an important role in their Coppa Italia win in 2012.

8) Henrik Larsson: While talking about Swedish strikers, we definitely talk of Zlatan Ibrahimovic but before him was Henrik Larsson, a talented Swedish striker, known for his performances for Celtic. He left the Scottish side on a free transfer to Barcelona in 2004. Despite him having an injury-laden first season at Barcelona, he surely made an impact in the 2005-06 season, where he assisted both of Barcelona's goals to help them beat Arsenal in the Champions League final.

9) Marc Albrighton: Marc Albrighton might definitely be a lesser-known name in this list but the forward was a crucial figure for Leicester City in their dramatic and maiden Premier League title win in the 2015-16 season. Albrighton had moved from Aston Villa on a free transfer and had performed well under the tactics of Claudio Ranieri that memorable season.

10) Sol Campbell: To many, Sol Campbell was a traitor after he had left Tottenham to join archrivals Arsenal in 2001 but the England defender would be mighty proud of this move, as he went on to win two Premier League trophies in his five years at the club. He is also etched in Arsenal history as a member of the Invincibles squad that went through a whole season unbeaten from 2003-2004.

(The above story first appeared on LatestLY on Jun 02, 2021 12:10 AM IST. For more news and updates on politics, world, sports, entertainment and lifestyle, log on to our website latestly.com).