Is This Janhvi Kapoor-Khuhsi Kapoor's Take On The Viral Lip-Syncing Baby Video? 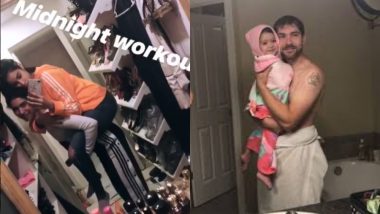 The internet is currently obsessing over a video of a baby lip-syncing to the lyrics of Maroon 5's Girls Like You while clinging like a cute little monkey to her dad. If you haven't watched the video yet, you should not be allowed access to the internet because clearly, you are not putting it to good use. Well, seems like the cutness-frenzy has hit Janhvi Kapoor and Khushi Kapoor as well. Our favourite Kapoor sisters can be seen in a video in what looks like their attempt at recreating the lip-syncing baby video. Koffee With Karan 6: After Sara Ali Khan, Janhvi Kapoor Marks Her Debut With Brother Arjun Kapoor.

A video which was shared by Janhvi on her Instagram story was later re-shared by her fan pages. The video features Khushi doing situps in front of a powder room mirror, while Janhvi is perched on her back. They have captioned the video as 'midnight workouts'. But we would not be surprised if they were trying to imitate the baby-dad from the video. If they were not, they can take this as an idea. Thank us later. Janhvi Kapoor’s Queenly Grace Is Well Highlighted in Her Recent Photoshoot – View Pics.

Watch The Video of Janhvi Kapoor and Khushi Kapoor Being Goofy Here:

InstaStory | These two are literally the cutest. @janhvikapoor @khushi05k

Nevertheless, Janhvi and Khushi's video is also quite cute. Sorry, not as cute as the lip-syncing baby video but close enough.

On the work front, Janhvi's debut film, Dhadak, has turned out to be a huge hit. She has already signed her second film with Dharma Productions which is titled Takht and is due to release in 2020. Reports also suggest that Janhvi will star in a film based on the life of IAF Pilot Gunjan Saxena, who was the first woman to fly an aircraft during the Kargil War.

(The above story first appeared on LatestLY on Oct 13, 2018 02:05 PM IST. For more news and updates on politics, world, sports, entertainment and lifestyle, log on to our website latestly.com).