According to Akhil Bharatiya Akhara Parishad (ABAP) president Narendra Giri, 'akharas' may be categorised into three categories based on the deities they worship -- Shaiva, Vaishnava and Udaseen. 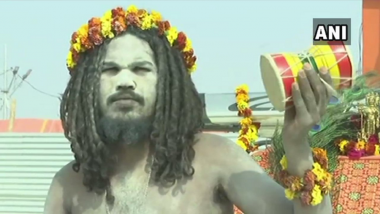 Lucknow, January 14: Considered an integral part of the Kumbh Mela, 'akharas' set up at the venue virtually steal the show. The 'akharas' were formed following efforts by the eighth century Hindu seer Adi Shankaracharya to unite organisations of ascetics to protect the 'sanatan' way of life. Each 'akhara' houses followers of similar religious customs, views and ideologies, who specialise in both scriptures and armaments.

According to Akhil Bharatiya Akhara Parishad (ABAP) president Narendra Giri, 'akharas' may be categorised into three categories based on the deities they worship -- Shaiva, Vaishnava and Udaseen. Of the 13 'akharas', seven are Shaiva and three each are Vaishnava and Udaseen, Giri said. Kumbh Mela 2019: First Time Artificial Intelligence to Use for Better Crowd Management.

Latest visuals from #KumbhMela in Prayagraj. The Mela opens from tomorrow. pic.twitter.com/iYmiYQayTX

A five-member committee looks after the order and operations of the organisations. In terms of strength, Juna Akhara is the largest, followed by Niranjani and Mahanirvani Akharas. The Akhil Bharatiya Akhara Parishad has been established to promote mutual harmony and settle any dispute among the akharas.

Giri told PTI, "There are three shahi snaans (royal bathing days) out of the six bathing dates during the Kumbh Mela. The bathing will commence at around 4.00 am and will continue till 5.00 pm." The 2019 Kumbh Mela will commence on January 15 on Makar Sankranti which will be the first bathing day.  Mahashivratri on March 4 will mark the last bathing day.

More than 12 crore people are expected to take part in the event over the next 50 days. Devotees take holy dips at the sacred confluence of the Ganga, the Yamuna and the mythical Saraswati. There will be magnificent processions of seers and their disciples, and members of various 'akharas' to take part in the ritual of 'shahi snan', also known as 'rajyogi snan', at the start of Kumbh.

'Shahi snan' is the central highlight of the Kumbh Mela and the most important part of the celebration. It is only after the completion of 'shahi snan' that people are allowed to take the holy dip. The auspicious bathing days of the 2019 Kumbh Mela are Makar Sankranti (January 15), Paush Poornima (January 21), Mauni Amawasya (February 4), Basant Panchami (February 10), Maghi Poornima (February 19) and Mahashivratri (March 4).