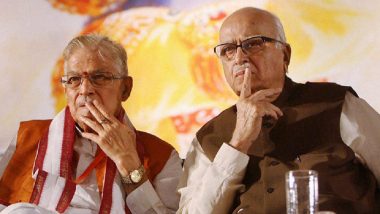 Lucknow, May 28: Trial in the Babri Masjid demolition case would re-commence from June 4, said a statement issued by the Special Court in Lucknow that would hear the final batch of arguments. The court, from the said date, would begin recording the statements of all 32 accused involved in the conspiracy and execution of the 16th century mosque's demolition in Ayodhya. Babri Masjid Demolition Case: Supreme Court Extends Deadline For Completing Trial, Issuing Verdict Till August 31.

Kalyan Singh, the former chief minister of Uttar Pradesh, was heading the state government in 1992 when a frenzied mob allegedly led by Advani and Bharti stormed into Ayodhya and demolished mosque on December 6 of that year. Singh's government was dismissed after he was accused of disobeying the apex court order.

Advani, who was then leading the BJP, was leading the nationwide Rath Yatra to mobilise support for Ram Mandir construction in Ayodhya. Advani later went on to become India's Deputy Prime Minister in the government headed by Atal Bihari Vajpayee. Joshi, another accused, served as the Union Cabinet Minister in the Vajpayee regime.

The verdict in demolition case was scheduled to be issued by 2019. However, the immunity granted to then Rajasthan Governor Kalyan Singh led to a delay in the proceedings. The Supreme Court had extended the deadline for case closure by nine months.

The deadline was extended till August 31 this year by the top court on May 8. The tenure of judge SK Yadav was also extended by the court till the said date - despite him due for retirement - to ensure timely completion of the case.

(The above story first appeared on LatestLY on May 28, 2020 05:33 PM IST. For more news and updates on politics, world, sports, entertainment and lifestyle, log on to our website latestly.com).