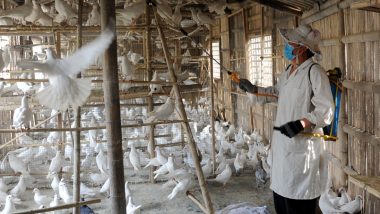 New Delhi, January 28: Bird flu, also called avian influenza, has come as a double whammy for India when the country is already fighting the battle against COVID-19 pandemic. Bird flu cases have been confirmed for poultry birds and in 9 States till January 27 including Kerala, Haryana, Madhya Pradesh, Maharashtra, Chhattisgarh, Uttarakhand, Gujarat, Uttar Pradesh and Punjab. Meanwhile, the outbreaks of Avian Influenza (Bird flu) have affected crows, migratory bird and wild birds in 12 States so far. Bird Flu FAQs: Is it Safe to Eat Eggs & Chicken? Do Humans Get Infected With Avian Influenza? Here Are Answers to Your Doubts.

A government press release stated that Control and Containment Operations (Cleaning and Disinfection) are going on in the affected epicentres of Maharashtra, Madhya Pradesh, Chhattisgarh, Punjab, Uttar Pradesh and Gujarat. Meanwhile, surveillance work is continued at the places where positive results have been reported in other species of birds excluding Poultry.

All the States are reporting to the Department on daily basis regarding the control measures adopted by the States/UTs based on the Revised Action Plan for Prevention, Control and Containment of Avian Influenza 2021. The Department is taking continuous efforts to generate awareness about Avian through platforms including social media platforms like Twitter, Facebook handles.

(The above story first appeared on LatestLY on Jan 28, 2021 02:46 PM IST. For more news and updates on politics, world, sports, entertainment and lifestyle, log on to our website latestly.com).